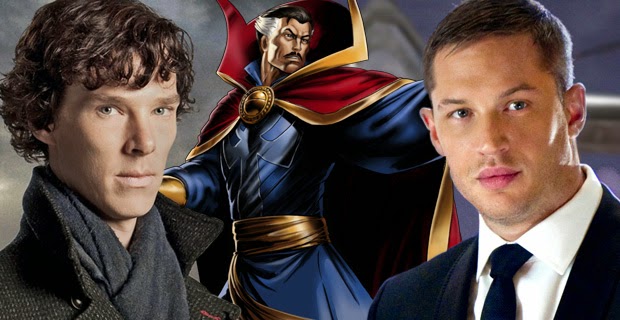 A lot of news surrounding Marvel's Doctor Strange has come out lately. It got its director in Scott Derrickson and a rumor went around that Oscar-winner Jared Leto could be the Sorcerer Supreme (you can read our article on it here). Now, two more actors have been thrown into the mix: Benedict Cumerbatch and Tom Hardy.

Personally, I think Cumberbatch would be perfect as Doctor Strange. He's got a large fan-base that will draw people in, which is what Marvel needs for this practically unknown property. He's younger, so he could potentially play this character for a while. His physical stature fits Doctor Strange's. He's tall and thin. He's also got an instantly recognizable voice which would be perfect for chanting spells. I think Cumberbatch meets every point on my checklist for an actor playing Doctor Strange.

While I love Tom Hardy and he is one of my favorite actors, I don't think he'd be a great fit for Doctor Strange. Or, at least, not as great of a fit as Cumberbatch.

What do you think? Are Cumberbatch and Hardy good fits for Doctor Strange? Leave your thoughts in the comments section.