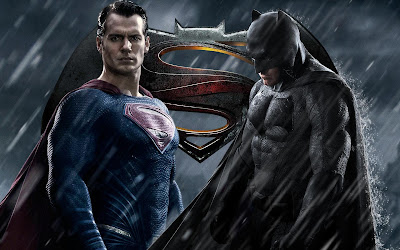 One movie in 2016 that I absolutely can't wait for is Batman v. Superman: Dawn of Justice. Even though I am through-the-roof excited for the movie, it isn't even my most anticipated film of that year. Right now, that prestigious honor goes to Deadpool, which is a testament to how f*cking excited I am for that film! But as Dawn of Justice slowly begins to build up its marketing for its March release, it has a lot riding on it. If this movie doesn't perform well, then it's bye-bye for all of DC's big plans for their DC Cinematic Universe! But the movie is starting on a good note, as a lot of people (myself included) really liked the first teaser. You can read our analysis/breakdown of the trailer here. And now, DC has revealed the official synopsis for the movie.

The synopsis for Batman v. Superman: Dawn of Justice reads:

"Fearing the actions of a god-like superhero left unchecked, Gotham City's own formidable, forceful vigilante takes on Metropolis's most revered, modern-day savior, while the world wrestles with what sort of hero it really needs. And with Batman and Superman at war with one another, a new threat quickly arises, putting mankind in greater danger than it's ever known before."

I think this synopsis is awesome! Granted, it doesn't reveal much more than what we already know, but it really shows me that this movie is taking the direction I want it to take. What makes Batman and Superman such great friends in the future is the fact that they are so drastically different, with clashing ideologies. That dynamic is one that I really wanted to be explored in Batman v. Superman when they are going against each other. From the first couple sentences, it seems that is exactly what we will be getting. And I think we all knew that something else was going to happen in this movie, a threat, that would force the two heroes to join forces... which this synopsis confirms. Whether its Doomsday, Brainiac or someone else that has yet to be rumored at this point is unknown, but I really like the direction this movie is taking and I hope to God that it's awesome!

What do you think? Do you like the synopsis? Are you looking forward to Batman v. Superman: Dawn of Justice? Leave your thoughts in the comments section below.