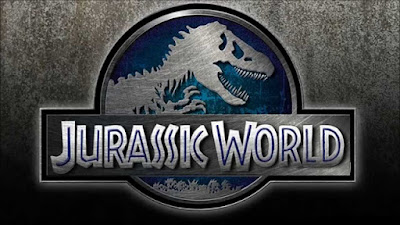 This past weekend saw the release of Jurassic World (read our review here), which did massive damage at the box office. It crushed all sorts of records, becoming the biggest domestic and worldwide opening for a movie ever. Pretty much everyone liked it, as it resonated with a lot of people. The nostalgia of revisiting that world created in 1993's Jurassic Park was nothing short of magical. A big part of it was the soundtrack, composed by Academy Award winner Michael Giacchino. It brilliantly took queues from John Williams' classic score for the original, but infused its own style into it. The theme for this movie took Williams' theme, but played it in a quieter, slower piano. It was recognizable, but its own thing. So, I absolutely loved the soundtrack.

In a recent interview, Giacchino talked a little about creating the score, and how he infused Williams' previous score into this film. When asked whether he had met with Williams or if he just came into work with director Colin Trevorrow, he said:

"I just came in with Colin. I know John very well and he's been really wonderful and supportive to me over the years, so I feel like I know those scores and what those films tried to say so well, and I also know that Colin really wanted to put something new in there. We both love Jurassic Park and the first thing we both wanted to do as fans, we both decided there is no way we're going to make this movie without that theme somewhere, but it has to be earned and it has to mean something. We don't just slap it in because, so the use of the theme was really in the reveal of a promise that was made in the first movie, when they were saying 'We're going to build a dinosaur park', and that's what's wonderful about this one, it's delivering on that promise."

"So it was very targeted and we figured out where we were going to use it but then Colin also said, 'I want our own theme as well,' what he kept saying to me was 'I want the movie to have not just a soul but the movie to have a soul and I want there to be moments where we feel like we're actually in a church, and that's sort of the reverence we had for the original film and what John and Steven (Spielberg) did over the years, but we wanted to bring something new to it, that was important to us too." 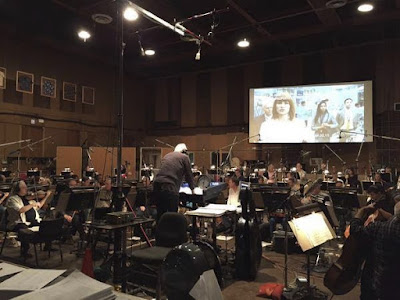 Giacchino behind the scenes on Jurassic World

I really like these comments. I'm glad Trevorrow and Giacchino were so respectful of the original film coming in. Not only is the film a classic, but everyone knows that movie's theme. So the fact that Giacchino was careful to put it in only where it was needed makes me happy. Not only is he a brilliant composer, but it really seems like Giacchino has a lot of respect for composers who have come before him. Like I said before, I was very impressed with how the soundtrack came together, incorporating the old music and blending it with the new. Now it seems Giacchino is going on a vacation, as he has composed four films this year, in Jupiter Ascending, Tomorrowland, Jurassic Park and next week's release, Inside Out. He has had a busy year and a lot to be proud of.

What do you think? Do you like Michael Giacchino's comments? Did you like the soundtrack for Jurassic World? Have you seen the film yet? Leave your thoughts in the comments section below.