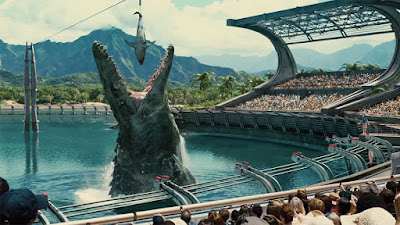 As Jeff Goldblum said in the first Jurassic Park, chaos theory is the idea that everything that can go wrong, will. We have no way of predicting things because we have no way of knowing the outcome. That is essentially the main basis for Jurassic World. For a fourth installment to a franchise that had a brilliant first film (one of my all time favorite movies), followed by two mediocre movies, Jurassic World had a lot riding on it. Not only were people hoping this film would reinvigorate the franchise, but it was going to be our proof of whether Chris Pratt could do roles outside of the Star-Lord/Andy Dwyer type characters. Plus, it was my third most anticipated movie of 2015. So I went in with pretty high expectations. And I am happy to say that this movie not only met them, but surpassed them.

Jurassic World takes place over twenty years after the events of the original film. The vision of John Hammond (the late Richard Attenborough) has finally been realized, as the park is officially open to the world as "Jurassic World", a Disneyland-type destination spot. However, people are getting used to being able to see dinosaurs. As Bryce Dallas Howard puts it at the beginning of the film "People are reacting to dinosaurs like they do to seeing elephants at the zoo." The wow factor is no longer there. So what do they decide to do? Breed a bunch of different dinosaur species to make a hybrid dinosaur to attract the crowds. Hence chaos theory and the whole world goes to sh*t! 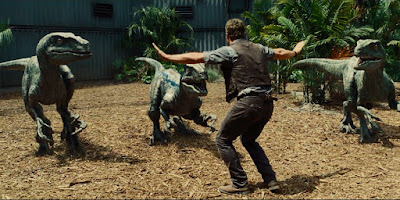 Chris Pratt plays Owen Grady, a raptor trainer who works at the park. I loved how the raptors were used in the movie. It would make sense that these animals would be domesticated, as the people would want to exert their control over them. But never for a second did they let you forget how dangerous the raptors could be. When we are first introduced to Grady, a new employee gets trapped in the raptor cage, and it is a serious "Oh sh*t!" moment as Grady must try to control the raptors to save the employee. They were ruthless animals, and that was never diminished with them being trained. Instead, they became more like a ticking time bomb, making you wonder when they were going to snap and eat someone. And while Chris Pratt's performance in this movie wasn't drastically different from his other roles, it shows that he can at least play different types of characters, instead of just one type. That is something I really was looking for going in.

Bryce Dallas Howard plays Claire, one of the people in charge of the island. The story starts off with her nephews (Ty Simpkins and Nick Robinson), whom she hasn't seen in over seven years, coming to visit her. However, she is a very busy woman and doesn't have time to hang out with her nephews. But when they get lost in the park as the hybrid is on the loose, her innate aunt skills kick in and she becomes a true badass. While she seemed kind of flat in the beginning of the movie, Howard has a nice character arc that makes her more fully realized by the end. 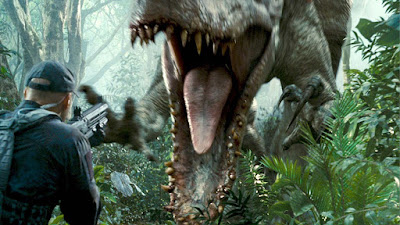 The hybrid, Indominus Rex, looked fantastic. I really liked the design of it. It was big, scary and wasn't a slow stalker like the T-Rex, but rather quick and agile. The filmmakers had a lot of fun playing around with the different genes used to create the hybrid, and the side effects those genes have on its abilities. They work to make Indominus Rex even more formidable as a villain. Overall, the CGI was really good. There were some shots that were weaker than others, but in general it was very well done. There was one scene where they made a practical dinosaur, like what they did a lot in Jurassic Park, and it worked beautifully. I wish they had utilized practical effects a little bit more, because some scenes could have benefited from that rather than CGI.

I think my favorite part of the movie was seeing how this park operates. It was cool to see so fully developed with a "Tyrannosaurus Rex Kingdom" and gift shops. I was really immersed in this world. If this park were to actually happen in real life, this is exactly what it would look like. The filmmakers nailed it. They put a lot of detail into showing the inner-workings of this island, and it made it so much more believable.  I give a lot of credit to director Colin Trevorrow, who made this movie look visually spectacular. 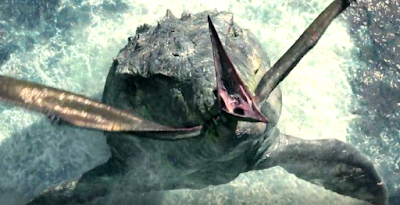 Overall, I had a great time watching this movie. As soon as I heard the classic John Williams theme, a big smile broke out on my face. The music was a great tribute to the original score, without simply copying it. And that's a great way to sum up this movie. It pays a lot of respect to the original film without simply copying it. It captures the fun, excitement, terror and danger of the first one but brings it to new levels. The third act of this movie is incredible. Now, it isn't a perfect movie, but it definitely delivered. I wasn't expecting to really buy into the characters, but I was actually invested in them, and appreciated their story arcs. There were some one-dimensional, flat characters but the main ones were very fleshed out and three-dimensional. The effects were really good, but I wish they had used some more practical effects, as when they did do it it looked great. This movie is suspenseful and heart-pounding, as well as endearing and fun. It recaptures a lot of the magic of Steven Spielberg's masterpiece while adding something new to it. I am very excited to see where they go with this franchise next.

What do you think? Did you see Jurassic World yet? Did you like it? Leave your (spoiler-free) review in the comments section below.