I was honestly surprised at how much I loved 2011's Mission: Impossible- Ghost Protocol. The film was directed by Brad Bird and is an incredible, breathtaking movie. From the insane action scenes to the deeper, emotional moments with Tom Cruise's character, it is just a very well-rounded and enjoyable film. The fifth installment in the franchise, titled Mission: Impossible- Rogue Nation, is set to hit theaters on July 31st. The first trailer was released back in March, which you can see here, and I loved it. I thought the movie looked incredible. Well, we now have our second trailer, and it is even better than the first.

This trailer was relentless. It never let up with the glimpses at the insane action scenes (no shaky cam, thank God) and the light-hearted humor that made Ghost Protocol so much fun. Director Christopher McQuarrie seems to have adapted what Bird did so well with his film while also infusing his own style into it. Tom Cruise has proven himself time and time again to be a true action hero. One of my favorite movies of last year was Edge of Tomorrow, which he was excellent in. It seems like this film will equally offer up some very innovative and exciting action scenes, as that film did. I am especially excited to see the highway chase between Cruise and the Rogue Nation members. And of course, the plane sequence looks incredible, especially since Cruise really did it, using no green screen or CGI. My only complaint is that the plot of this film seems overly close to the last one, where the MIF is shut down and Ethan Hunt's team are enemies of the state. But I think the movie as a whole will compensate for that tiny fact. The supporting cast looks great as well, including Jeremy Renner, Simon Pegg, Ving Rhames and Alec Baldwin. 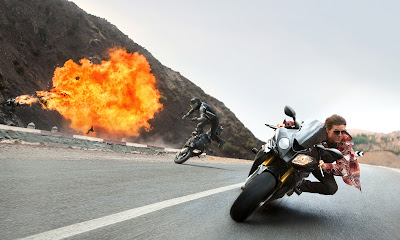