Jake Gyllenhaal might be one of the best actors working today. He was fantastic in last year's Nightcrawler. A lot of people say he absolutely deserved to be nominated for an Oscar. While I didn't think the need was that extreme, I thought he should have been on that list. Now put him in a film where he plays a boxer who has just lost his wife, and now you potentially have an Academy Award nomination on your hands. It wasn't too long ago that the first trailer for Southpaw came out (you can see that here), which I really liked. A lot of people criticized it of spoiling the whole movie, but I bet that a lot of what they showed, specifically his wife being murdered, happens in the first fifteen to twenty minutes of the movie. But now a second trailer has been released.

While I liked this trailer, it was essentially the same exact trailer as before. It had the same beats, the same shots, except it took out some stuff, added a couple new things. There wasn't anything radically different in this one than the first. Now, I don't really need to see any more to get me excited for this movie. I'm going to be there opening weekend, no doubt. But for a second trailer, it just didn't have anything new, which was disappointing. However, his does nothing to diminish my hopes or my expectations for the film. I think this could be one hell of a movie! 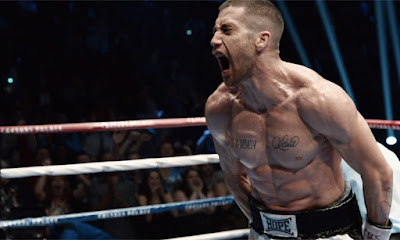 What do you think? Did you like the trailer for Southpaw? Are you looking forward to the film? Leave your thoughts in the comments section below.