After six Rocky movies, the franchise needed a bit of a change-up in order to keep it fresh and to keep it going. So they did what made me groan at first but has since become a genius idea. When I heard they were doing a spin-off film, it seemed like a cash-grab to me. But since we have learned details that have made this decision genius. They brought on Michael B. Jordan as Apollo Creed's son, and his Fruitvale Station director Ryan Coogler. I recently watched that movie for the first time, and it's a fantastic film. With that casting and the announcement that Sylvester Stallone would be in a supporting role as opposed to the film's lead, I really bought into this movie. And now, we have our first trailer.

I think this movie looks incredible. For the first thirty seconds, you can't even tell it's apart of the Rocky franchise-- it just looks like a regular boxing film until Stallone shows up. The idea for the movie sounds great, with Rocky being a mentor to his former enemy's son. This movie has a potential to attract some Academy Awards. A lot of people forget that the original Rocky had a lot of Oscar attention. It won Best Picture, as well as for directing and film editing. Even Stallone himself was nominated for acting and writing. Creed could very well get a couple Oscars on its mantle as well. 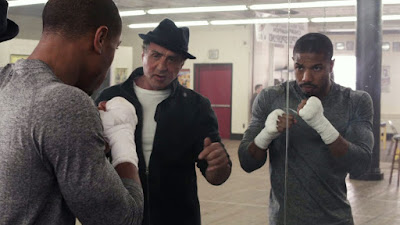 What do you think? Did you like the trailer for Creed? Are you looking forward to the film? Leave your thoughts in the comments section below.