First Trailer for The Revenant

The Revenant is a movie I have been interested in for a while. Director Alejandro González Iñárritu wowed audiences last year with Birdman, which not only won Best Picture at the Academy Awards, but won Iñárritu an Oscar for Best Director. I thought Birdman was a great movie, mainly because of the technique used to make the film look as if it was all one long shot. This resulted in filming twenty minute shots that had to track all over the place. In order to film this way, and succeed, it took a masterful director, which Iñárritu proved himself to be. So when I heard that he had a new movie coming out this year, starring two of my favorite actors working today in Leonardo DiCaprio and Tom Hardy, I was instantly in. The premise is also fantastic- DiCaprio is part of a group of friends hunting, along with Hardy, in the woods in the late 1800's, when DiCaprio is mauled by a bear. Hardy and his friends leave him for dead, causing DiCaprio to brave the elements to exact his revenge on Hardy. I have been dying to see a trailer for this movie, as it sounds brilliant, and now we have our first trailer.

I love this trailer. It is shot beautifully, by director of photography Emmanuel Lubezki, who also worked with Iñárritu on Birdman. That was what stood out to me the most: how perfectly shot it was. The bleak color palette also worked to create this dramatic and heavy atmosphere. Both DiCaprio and Hardy look fantastic in this trailer, and I have high hopes for this movie. Could this be the film that finally gets DiCaprio his Academy Award? Maybe. Maybe it will get Iñárritu a second Oscar in a row. Or Hardy a nomination. There's so much potential for this movie, that I really hope it delivers. And with the team working behind this movie, I have little doubt it will work. 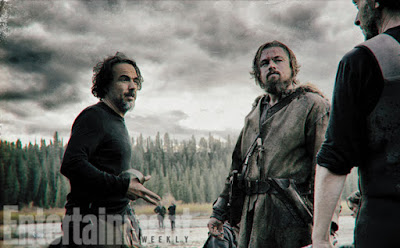 What do you think? Did you like the trailer for The Revenant? Are you looking forward to the film? Leave your thoughts in the comments section below.