In Preparation For: Terminator 2: Judgment Day 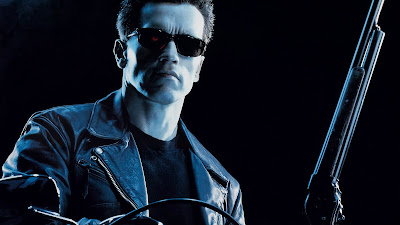 With the fifth installment in the franchise, Terminator: Genisys, opening in theaters this weekend, I thought I would go back and re-watch the first two films: The Terminator and Terminator 2: Judgment Day. In this series "In Preparation For", I watch the films leading up to a new release and review them in-depth with spoilers. So if you haven't seen Terminator 2: Judgment Day yet, go watch it and then read this. Because we're going. full out with this. And you can read our review for The Terminator here.

Terminator 2: Judgment Day is one of my favorite movies of all time. Look, I really liked the original film. But in my eyes, it's got nothing on this film. Writer/director James Cameron took the foundation of what he did with the first film, a cool science fiction thriller, and turned it into a full-blown action film (similar to what he did with Aliens). But what makes T2 so great is that it's not just a mindless action movie. It has a profound layer of depth, deeper than the first film in many ways. 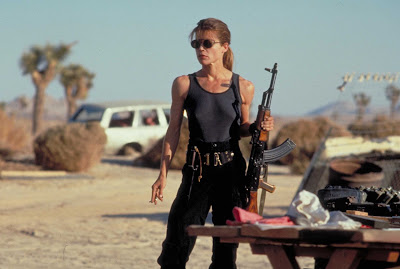 T2 takes place ten years after the original. Sarah Connor (Linda Hamilton) is a full-blown badass from the start. She has been locked up in a mental institution while an adolescent John Connor (Edward Furlong) lives in a foster home. Since the original Terminator failed at his mission of killing Sarah Connor, the machines have sent another one to take out John as a child. However, this isn't your 1984 Terminator. This is the T-1000, played by Robert Patrick, that is made of a liquid metal alloy that allows him to contort his body into different metal shapes ("Knives and stabbing objects", as Arnold Schwarzenegger so gracefully puts it). In order to stop the T-1000, future John Connor sends a rebooted Terminator (Schwarzenegger) to protect his younger self.

This movie improves on everything that The Terminator did. That's not a knock on the original. If you've read my review, you know I really like that movie. But where The Terminator was good, T2 is great. The pace of the movie is faster, and keeps pretty much throughout the film. The action is incredible. Now, the original film wasn't meant to be an action movie, but Cameron saw the opportunity and gave us a brilliant action film with this sequel. From the car chases to the fistfights to the gunplay, the action in this movie is spectacular to watch and very well done. I often prefer action movies from the 80's and 90's because they don't use rapid editing and shaky cam to make their action scenes effective, like movies do today. 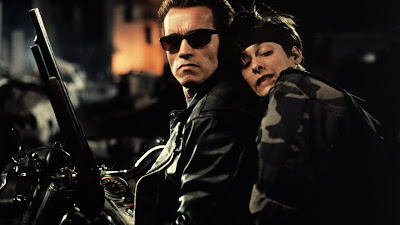 Most times in movies, child actors can really annoy me. However, Edward Furlong was really good in this movie. Sometimes he could be overly whiny, but for the most part I thought he did a very good job. Hamilton also did another great job as Sarah Connor. I thought she was better as the badass warrior in T2 then the confused McGuffin in The Terminator. It fit the character better for this film, and she really rose to it. But yet again, the stand-out in this movie is Arnold Schwarzenegger as the Terminator. I like him better as the hero in this movie, mainly because they give him more to do. He learns a lot about what it means to be human, which offers for some great comedic moments (such as trying to smile), but it also offers a lot of accurate insight into us as a species, which adds to the depth of the film. Schwarzenegger just yet again perfectly delivers as a cyborg, giving a fantastic performance, which I think if often overlooked.

I also have to talk about the special effects. For those who don't know, the special effects for the T-1000 were revolutionary. Cameron only made this movie because, while doing the famous water scene in The Abyss, he realized he could finally do the effects of the liquid metal that he had been wanting to do since the original film. For the most part, the effects still hold up to this day. There are some shots that would be improved upon if made today, but they are still so well-done and perfectly crafted. It was T2 that revolutionized CG animation in movies. It's what allowed movies like Jurassic Park to even happen.

I don't have many criticisms about the film. I said that the first movie had a lot of conveniences, which I think the sequel adopted as well, but not nearly as much. There were only a few noticeable ones, like how Sarah Connor was breaking herself out of the institution the exact same night that the Terminator and John were coming to rescue her. But other than that and a few nitpicky things, I don't really have any problems with this movie. It is just a fantastic movie in my opinion, and, as I said before, is one of my favorites.

Overall, T2 changed the game. It revolutionized CGI with the effects done for the T-1000. It also improves on everything The Terminator accomplished. It turns into a full-blown action movie while still retaining heart and depth. You can tell Cameron grew as a director from The Terminator, his directorial debut, to T2, his fourth film. It's just such a great movie that I highly recommend to anyone who has not seen it yet.

What do you think? Do you like Terminator 2: Judgment Day? Are you looking forward to Terminator: Genisys? Leave your thoughts in the comments section below.