In Preparation For: The Terminator 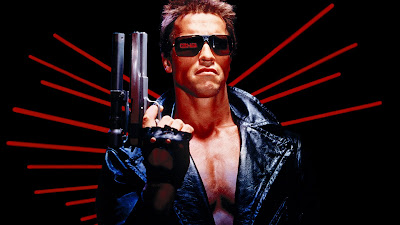 With the fifth installment in the franchise, Terminator: Genisys, opening in theaters this weekend, I thought I would go back and re-watch the first two films: The Terminator and Terminator 2: Judgment Day. In this series "In Preparation For", I watch the films leading up to a new release and review them in-depth with spoilers. So if you haven't seen The Terminator yet, go watch it and then read this. Because we're going full out with this.

If you were to ask anyone what are the most influential science fiction films of all time, The Terminator is bound to be one of them. From the story to its visual style, this film has impacted not just science fiction filmmakers, but filmmakers of all genres ever since its release in 1984. It is a brilliant concept that has spawned a long and sustaining (for the most part) franchise. 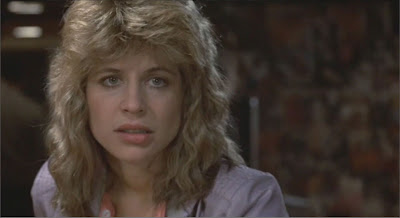 The Terminator revolves around a girl named Sarah Connor (Linda Hamilton), who discovers she is being hunted down. Someone is going through the phone book (anyone under the age of 13 should Google what that is) and hunting down anyone named "Sarah Connor". Two have already been killed and she is the last one. While she is hiding out at a bar waiting for the police, a man approaches her with a gun, which is Arnold Schwarzenegger. She is saved by a second man, which is Michael Biehn. After a large scale fight, Sarah is finally enlightened: in the future, man-made machines take over the earth after causing nuclear war, and the human survivors are in long-lasting war against the machines. The leader of the human revolution is John Connor, who is Sarah's unborn son. The machines send a cybernetic killer, a Terminator, into the past to kill John's mother in order to wipe him from existence. The survivors send Kyle Reese (Biehn) as well to protect Sarah to ensure that John will be born.

One of my favorite things about this movie is simply the plot. In my opinion, it has to be one of the single greatest plots to a movie ever. Yes, it may be complicated, but it is so ingeniously crafted and developed. Instead of just making a movie about a war between man and machines, or about how machines rose to power, writer/director James Cameron took the exact same idea and gave such an innovative and creative spin on it. It is just a brilliant story. That's probably why every single sequel to this movie has tried to recreate the exact same plot over and over again. 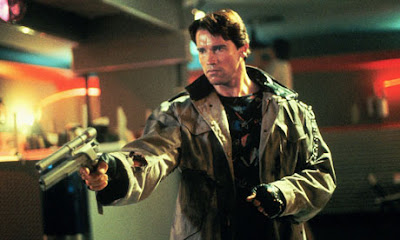 As for the performances, Hamilton and Biehn are both great in their roles. I do think that Sarah Connor believed Kyle Reese's fantastical story of his being from the future way too easily, but that's nitpicking. They were both great in the film, but I think everyone will agree-- the standout in this movie is Arnold Schwarzenegger. I love him in movies, but anyone will tell you he's not the greatest thespian in the world. However, in the role of a cyborg, Schwarzenegger truly shines. T2 is my favorite Schwarzenegger film, because he is so good at playing this character. It is really a role he was born to play. He captures the monotone voice, the robotic movements and the deadpan face perfectly. It's just a role he is so well suited to play.

As for criticisms, there are several points in the film that are overly convenient. Like how in the bar, the Terminator just missed seeing her because she happened to drop the salt shaker at that exact moment. Or how Sarah couldn't get in contact with the police because every time they called her, she wasn't home and when she called them the line was busy. Those conveniences stick out a bit when you watch the movie. For the most part, the special effects are great for 1984, but there is one scene that makes me cringe when I watch it. It is when Schwarzenegger is analyzing the damage done to his eye. You can clearly tell that there the face is fake for the shots of the eye, and then the camera goes back to a side shot of the real Schwarzenegger. It is so blatantly obvious that is takes me right out of the movie. Take a look for yourself: 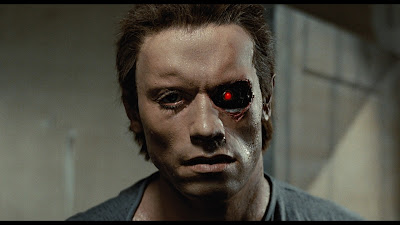 It barely even looks like Schwarzenegger. Oh well. The film also drags a bit at times. But other than those few criticism, I have nothing but excitement for this movie. The fact that this was James Cameron's first real film, and that he wrote it while he was living in his car is incredible to me. He worked hard to be able to keep as much creative control over the film as possible despite it having an unenthusiastic studio and a really low budget. He had a passion to make this movie, and it clearly shows in how everything was done and executed. Overall, this is an important science fiction film to watch. It tells one of the greatest stories in film, with a highlighted performance by Arnold Schwarzenegger. It also has so many classic quotes. "Come with me if you want to live." "I'll be back." I mean, come on. Those are legendary. I think this is a great film, though it's successor is an improvement in every way and one of my favorite films.

What do you think? Do you like The Terminator? Are you looking forward to Terminator: Genisys? Leave your thoughts in the comments section below.