SDCC 2015: The Green Lantern Reboot Now Has a Title 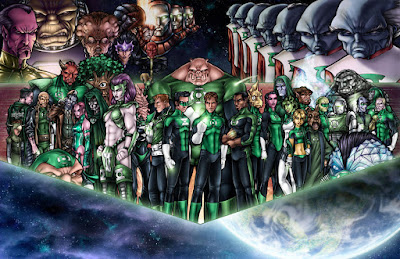 While the focus of DC's presence at San Diego Comic Con has been centered around their two 2016 releases (Batman v. Superman: Dawn of Justice and Suicide Squad), they have also revealed some information about their other releases. One of these comes in form of an update on the Green Lantern reboot, which isn't scheduled to be released until 2020. However, it now has a title. The reboot will officially be called Green Lantern Corps.

This is a very interesting development. A few weeks ago, it was rumored that the film would center around multiple Green Lanterns from Earth, as opposed to just Hal Jordan. This opened up the possibility of seeing characters such as John Stewart, Guy Gardner and Kyle Rayner. While I thought the report was most likely false, since the movie is five years away, I thought it was a great idea. The Green Lantern comics have always focused on the Corps as a whole, rather than one single character. Having this reboot be an ensemble rather than a focus on one particular Lantern made a lot of sense. It also allowed us to see John Stewart and other human Green Lanterns, rather than having to pick just one. The fact that the title was confirmed now makes me think that we may be seeing Green Lantern Corps sooner than 2020. The Batman and Superman solo film release dates haven't been revealed yet, so the schedule will most likely be shuffled around when they are annoucned, which would probably make Corps come sooner. It may also push The Flash back, since directors Phil Lord and Chris Miller will be directing a Han Solo Star Wars spin-off film the same year that Flash is supposed to come out (read that article here).

I'm really glad that the Corps will be the focus of the reboot. The one thing I think the subpar 2011 Green Lantern film did right was what it did with the Corps on their home planet of Oa. The designs of all the different alien species were really well done, and I think it was the strongest element of the movie. Yet they kept cutting away from Oa and going back to Earth. With the title Green Lanern Corps, it gives some assurance that maybe most of the movie will take place in space focused on the Corps. This movie could work excellently, if done in the style of a Guardians of the Galaxy, where they spent only five minutes on Earth. That's how you do this movie, no pun intended, justice.

What do you think? Do you like the title Green Lantern Corps? Are you looking forward to the reboot? What did you think of the 2011 film? Leave your thoughts in the comments section below.