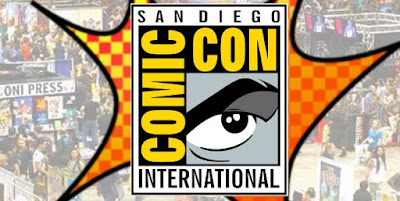 There has been a lot coming out of San Diego Comic Con this weekend. First, the Star Wars panel hit, which showed a behind-the-scenes featurette, while also confirming certain actors' involvement in the film, as well as revealing the characters of other known attached actor. You can read all about that here. Then, Batman v. Superman: Dawn of Justice blew up the internet by releasing a second trailer for the film (which you can see here). We also did an analysis/breakdown of the trailer, shot-for-shot, which you can see here. DC also unveiled a trailer for Suicide Squad, which has yet to be released online. And then Twentieth Century Fox ended things off by revealing first trailers for Deadpool and X-Men: Apocalypse, as well as a final trailer for August's The Fantastic Four. They then had the entire cast of the X-Men universe (Deadpool, X-Men and FF) get together for a selfie with Stan Lee. And you can read all about that here. So this weekend has been one long nerdgasm for everyone with Internet.

So with all of that coming out this weekend, it allows us to beg the question: who won Comic Con? Star Wars? DC? Fox? Let's find out! 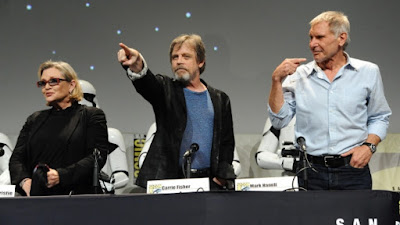 Star Wars had a pretty big presence at Comic Con. The panel brought out the entire cast of the film, including the big, original three of Carrie Fisher, Mark Hamill and Harrison Ford. The panel revealed some interesting tidbits about the film, such as confirming the character names of Adam Driver and Domhnall Gleeson. They also showed a behind-the-scenes featurette, which highlighted the use of practical effects in the film, over CGI. It also revealed that Simon Pegg would have a role in the film, which had been previously rumored. You can read my full, in-depth article about the Star Wars panel here.

The featurette was really cool, being able to see all the sets of different ships and hanger bays, and getting to see Stormtroopers in costume. I loved the featurette, mainly because I am a big advocate of using practical effects over CGI when you can. Nothing feels more real when it's... actually real. Creating the set of the Millennium Falcon captures your imagination so much more than having actors in front of the green screen. So it was great to see their push for practical effects. But we're talking about what won Comic Con. A featurette and revealing the names of a couple characters doesn't exactly break headlines, not like some other things that came out of Comic Con. So I'm going to take Star Wars out of the running right now. What it did was great, but it didn't win Comic Con. 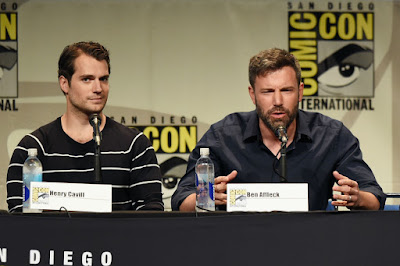 When it was announced that Marvel Studios would not be at Comic Con this year, everyone saw this as the perfect opportunity of DC to come in and knock it out of the park. And that's exactly what they did. They started out with doing a panel for Batman v. Superman: Dawn of Justice. They screened a new trailer for the film, which was put online soon after. You can read my thoughts on the trailer here, but in short, I think it's one of the best trailers I've ever seen. You can also read my analysis/breakdown of the trailer here. The trailer pretty much broke the internet, as it had nerds and fans alike applauding. A trailer is meant to get people excited, and that's exactly what this trailer did.

Next, DC had a panel for Suicide Squad. Director David Ayer took some shots at Marvel, claiming DC had the better villains, and to prove it, they made a movie exclusively about the bad guys. They then showed a trailer. However, it was leaked online, so DC decided to post it in HD. You can see the trailer here. I thought, while not as good as the Batman v. Superman, this was a really good trailer. They captured the character of Amanda Waller perfectly, and really nailed Harley Quinn and the Joker. The tone is dark and fitting for this new DC Cinematic Universe. That makes the second fantastic trailer to come from DC.

They also revealed some information about their other projects. They showed concept art of Gal Gadot as Wonder Woman, Ezra Miller as the Flash and Ray Fisher as Cyborg, yet haven't put it online. I have heard that the art looked great. They also revealed that the Green Lantern reboot will be titled Green Lantern Corp, which you can read about here. So ultimately, DC had a lot of news and coverage coming out of their panels. But so did the next studio. 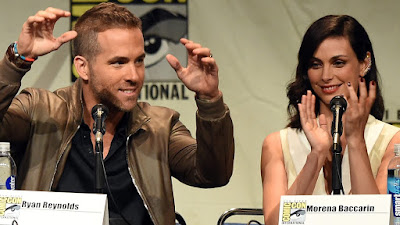 While everyone knew that DC was going to come in swinging, Fox kind of crept up on Comic Con. They had a lot to advertise for, with The Fantastic Four coming in August, and Deadpool, X-Men: Apocalypse and Gambit coming in next year. Fox kicked off Comic Con with a panel for The Fantastic Four. They talked a little more about what to expect from the superhero flick, and also unveiled the final trailer for the movie, which you can see here. I thought it was a great trailer, and only furthered my excitement for the film. But out of the rest of what Fox had in store, The Fantastic Four was the least interesting.

Next came the Deadpool panel, which brought out the whole cast. They showed a trailer, which was so well received, with such a standing ovation, that the trailer was shown a second time. Now, none of the Fox trailers (except The Fantastic Four) have been put online, which hinders Fox in the question of who won Comic Con. But from what I have heard, the Deadpool trailer was awesome because it really captured the character- motor-mouthed wise-ass. Ryan Reynolds says that the Comic Con trailer won't be released, but a trailer for the film will be coming in three weeks.

Then, there was the panel for X-Men: Apocalypse, which brought out literally the entire cast. No one was missing. And while they have only been filming for five weeks, they showed a trailer, which also hasn't been put online. There have been mixed reactions to the look of the villain, Apocalypse (Oscar Isaac). New pictures have been released online of the character, and I actually rather like his look. It was a bold choice going for make-up rather than just simply doing motion capture, but I think it will work in making a formidable villain. I have also heard that the trailer was fantastic (other than the complaints about Apocalypse), and looks to be another great addition to the X-Men universe.

Gambit star Channing Tatum then came out on stage with comics creator Stan Lee, and took a massive selfie with the cast of The Fantastic Four, Deadpool and X-Men: Apocalypse. So while Fox lost some points for not releasing their trailers, this was a great move. You can read my full coverage of the Fox panel here. 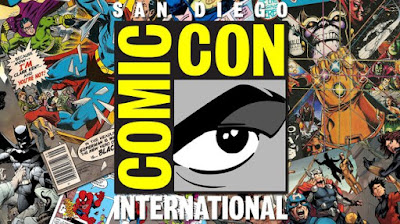 So who won Comic Con? I already took Star Wars out of the running because they didn't really reveal enough compared to the other studios. So it comes down to DC and Fox. DC put both of their trailers online. They were both great trailers, with Batman v. Superman being brilliant. They also revealing some more information about future films, while also showing concept art. But Fox put out three trailers, The Fantastic Four one being online and the other two being praised by those who saw it. They also took that massive picture, and teased the potential of an Old Man Logan movie. Both studios did a lot to promote their films and gets fans excited.

But I'm going to have to go with DC. If Fox had put the Deadpool and X-Men: Apocalypse trailers online, then this would be a much different discussion. But I've seen what DC showed, where as I can only go on what people said about the Fox panels. So, from my perspective, DC won Comic Con with its brilliant trailers and news.

What do you think? Do you agree with my choice for the winner of Comic Con? Who do you think won Comic Con? Did you like all the news and trailers that came out? Leave your thoughts in the comments section below.