Steve Jobs has gone through a lot of drama over the past year. The project went through many different directors' hands, including David Fincher, before landing with Danny Boyle. The film also switched out its lead actor several times, going from Christian Bale to Leonardo DiCaprio, back to Bale and finally to Michael Fassbender. It also switched studios from Sony to Universal following the Sony Hack late last year. But despite all of that, the film has finally gotten its sh*t together and is coming out this fall. We saw a quick teaser for the film which didn't really tell us much, but the full trailer has now come out, and it's awesome.

I loved this trailer. From a visual aspect, it looks fantastic. The cinematography looks great, and any doubts I had about Fassbender and Seth Rogen in their roles are completely gone. The story looks fantastic as well. They paint Jobs perfectly as two parts genius, one part asshole, which I think will make for a great and dynamic movie. Apple is one of the biggest things right now, and Steve Jobs was one of the most influential people of the modern age. This film looks like it could not only be a great movie about Jobs, but possibly a very big Academy Awards contender. 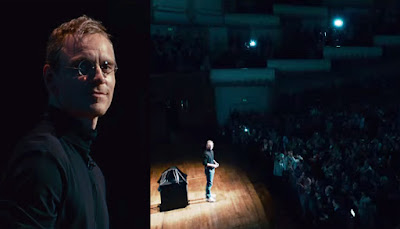