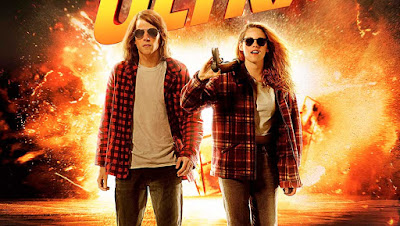 I never really bought into the trailers for American Ultra. I'm not a big fan of Kristen Stewart. While he was good in The Social Network, I don't really like Jesse Eisenberg. The plot seemed dumb. I just never bought into it. Then the movie came out and, even though the Rotten Tomatoes ratings were low, a lot of film reviewers I trust said they had a fun time with the movie. So I decided to check it out. I thought that it might be a dumb action comedy that was just some good entertainment for a couple hours. And in a way, it is. But in other ways it really fails.

Eisenberg plays Mike Howell, an unassuming stoner living with his girlfriend, Phoebe (Stewart). One day, he is attacked by a hit squad sent by Topher Grace's Adrian Yates, and he suddenly becomes a badass, showing skills he never knew he had. That is when he learns that he is part of a government experiment to create essentially super soldiers. And now he's on the run from this same organization, who think he is no longer an asset to the program. 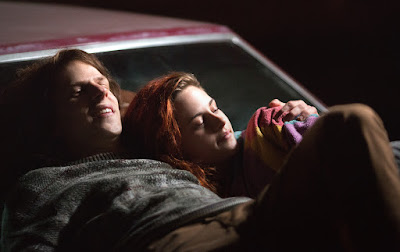 I don't think Eisenberg and Stewart did bad jobs in their roles, I just think their characters were poorly written. Some of the dialogue (especially their running metaphor about a car and a tree) was just awful. Their characters weren't fleshed out or three dimensional. But Eisenberg and Stewart did have chemistry, which made them bareable to watch, and even enjoyable at times. John Leguizamo has a small role in the movie, but he was just John Leguizamo being John Leguizamo. He didn't really add anything to the film. Tony Hale also makes a small appearance, and he was a stand-out in the movie. I love his character on Arrest Development, so it's always great to see him in movies. But while he has a small role, he added a lot when he was on screen. But the worst performance in this movie was Topher Grace by far. The character was poorly written, and Grace was just awful. He was overacting at every line, and became a whiny, annoying b*tch. By the end, I was really sick of him.

American Ultra's biggest problem is its writing. The story and plot was a mess, and it didn't make a lot of sense. It lifted a lot from The Matrix or Wanted, with its basic idea. But it's nowhere near as good as those films are. When this movie tried to be funny, the comedy fell flat. When it tried to be dramatic, it didn't always work. Two-thirds into the movie, they tried to pull a twist which I actually liked, but it was not set up well at all. It came out of nowhere and was really jarring. It's as if they decided to add this twist and then re-shot scenes to make it work. It was a good twist, it just did not work well in the movie. 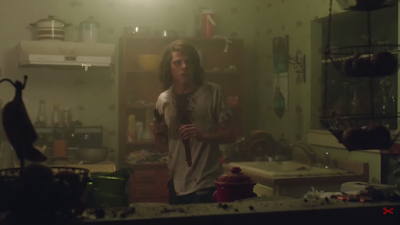 What saved this movie was the action. The action scenes were surprisingly well done. It was styllistic and well choreographed, similar to that of Kingsman: The Secret Service, which is one of my favorite movies of the year right now. It was bloody and brutal, and was thoroughly entertaining. American Ultra worked better as a light-hearted action film rather than an action comedy as it was marketed to be, since there is no good comedy. I actually bought into Eisenberg as a badass, which is something I was surprised about. Stewart was also really good when it came to the action. Like I said before, I've never been a fan of hers, but I actually liked her in this movie. The character wasn't well written, but her presence elevated the character and made her likable.

Overall, American Ultra is not a bad movie, nor is it a good movie. It's just kind of meh. The comedy falls flat and the writing is poor. But the chemistry between Eisenberg and Stewart makes their scenes watchable and engaging to an extent. Stewart specifically stands out as being likable and enjoyable to watch at times. The supporting cast was weak, with Leguizamo and Connie Britton being stale characters. And while Hale shined when he was on screen, Grace was a trainwreck to watch. The great action in this movie saved it from being a failure. This isn't a movie you need to see at all, but you may enjoy it on Cable or on Netflix some day. 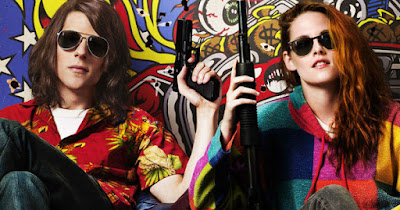 What do you think? Did you see American Ultra? Did you like it? Leave your (spoiler-free) review in the comments section below.