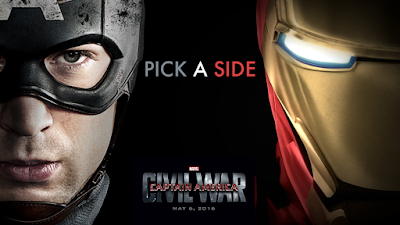 Marvel had yet another successful year this year with the releases of Avengers: Age of Ultron and Ant-Man. Though they both weren't Marvel's finest work, there were good additions to the overall Marvel Cinematic Universe. Next year will be even bigger, with the release of the highly anticipated Captain America: Civil War and the new flick Doctor Strange. But Civil War is the one in the forefront of the news right now. The movie just wrapped filming (which you can read about here), and also debuted footage for the audience at the D23 Expo (which you can also read about here). So with the film's May 2016 release date getting closer and closer, it seems only natural that little tibits would be dropped here and there. And today we may have gotten one of those. 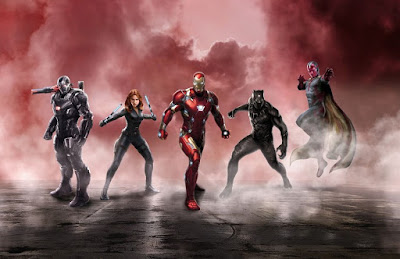 The other side is led by Captain America (Chris Evans), and has Hawkeye (Jeremy Renner), Ant-Man (Paul Rudd), Agent 13 (Emily VanCamp), Falcon (Anthony Mackie) and the Winter Soldier (Sebastian Stan). 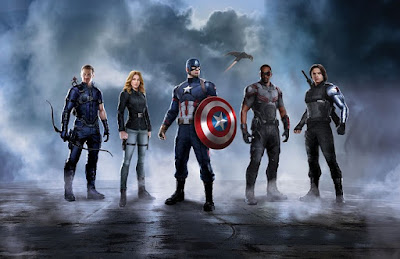 Another piece of art was also released, showing the sides in battled, pictured below: 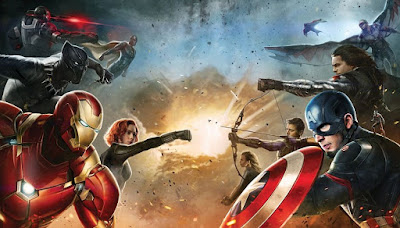 First of all, these sides make sense. Of course War Machine and the Vision would side with Iron Man, and of course Agent 13, Falcon, Ant-Man and the Winter Soldier would side with Captain America. The only questionable ones are Black Panther and Black Widow. What confuses me is why Black Widow and Hawkeye are separated. I would have expected them on the same side. And after Captain America: The Winter Soldier, I would have thought Black Widow to be sided with Cap. But I'm sure that's something the movie will explain. We also don't know why Black Panther is with Iron Man. We know he will be representing his country, Wakanda, but exactly how his political beliefs play into the civil war is unknown. We also don't know what sides Spider-Man (Tom Holland), Bruce Banner (Mark Ruffalo) or Scarlet Witch (Elizabeth Olsen) will take.

But I love the concept art. I'm a little skeptical about Agent 13 being in the actual field of battle, since she seems the least trained among the others, with superpowered beings fighting. But we only saw a little bit of her in The Winter Soldier, so maybe we'll see exactly why she's an important asset to have on your team in this film. I have been worried about this movie being overcrowded for a while, but looking at these pieces of concept art kind of takes away that fear. While there are other characters not shown in the art, the real battle will be pretty much five on five, and it doesn't look really any more crowded than an Avengers movie, which has proven to work before. Ultimately, the art looks fantastic and I can't wait to see this movie! 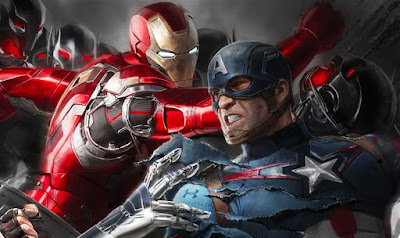 What do you think? Do you like the sides in Captain America: Civil War? Do they make sense to you? Do you like the concept art? Are you looking forward to the film? Leave your thoughts in the comments section below.