Victor Frankenstein is (yet another) retelling of the classic Frankenstein monster story. This time, the mad doctor is being played by James McAvoy and his helper Igor is played by Daniel Radcliffe. We all know the story: Frankenstein tries to create life by assembling random body parts and making an amalgamation of bodies, which comes to life as a monster. Under the direction of Paul McGuigan, Victor Frankenstein puts a new twist on the story by changing up the mythology. Dr. Frankenstein is not an older man, but a young man full of ambition. Igor is not a hunchbacked monstrosity in of himself, but rather a brilliant scientist who serves as Frankenstein's partner. I think the story of Frankenstein is a fascinating one, and it is definitely one of those source materials that is ripe for a new interpretation every few years. However, this trailer did not do it for me.

The trailer was too flashy and retro for what a Frankenstein movie should be. The song used was very modern, and I think set the tone of the film as something I'm not very interested in. There are elements of the trailer I really liked. I think the character changes in Igor and Frankenstein are smart, and I like the evolution of them creating the monster. We see them bringing a chimp to life, along with other test animals. That was a cool development. But aside from that, I was turned off by the tone of the film. It just isn't as serious as I would have liked it to be. This may end up being a great movie, but it's just not the kind of movie I would be interested in seeing. 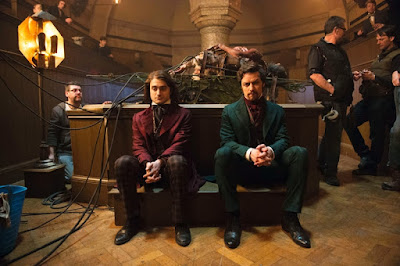 What do you think? Did you like the first trailer for Victor Frankenstein? Are you interested in the film? Leave your thoughts in the comments section below.