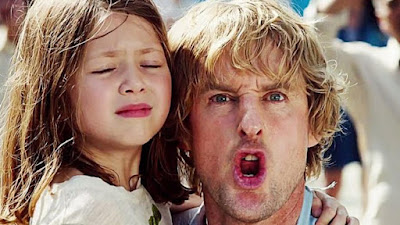 So I got to see an advanced screening of this film, No Escape. It was a really cool experience, but I didn't have high hopes for the film going in. I thought for sure this movie would end up being a piece of garbage. The trailers hadn't sold me on this film at all. It's something I totally would have skipped seeing. But, it was a free screening, so why not take advantage of that? So I saw No Escape, and let me tell you, it surpassed every expectation I could have had.

Owen Wilson plays his first dramatic role in years as Jack Dwyer, a father of two who has to move with his family overseas in order to partake in an international program involving the company he works for. Just as the family gets settled there, a coup arises among the indigenous people, throwing the country into total chaos-- and they're looking for Americans. Dwyer has to protect his wife, Annie (Lake Bell), and his two daughters Lucy (Sterling Jerins) and Beeze (Claire Geare). But with rebels marching the streets, and no way out of the country, there is quite literally... no escape. (Sorry, I had to do it). 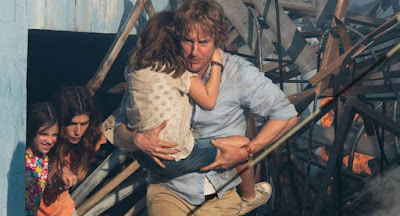 I was blown away about how intense and suspenseful the film us. The direction by John Erick Dowdle was excellent, as he knew how to perfectly craft this suspenseful atmosphere. I was on the edge of my seat during 90% of this movie. And what was great was that Owen Wilson didn't just all of a sudden become an action hero, shooting down rebels or something. He was just as vulnerable and scared as his family. It was a chase movie, with the family running from these people hellbent on killing them. This movie's strongest suite was the suspense. It could have easily been cheesy, but from the camera angles to the editing to the directing, it all felt real.

The performances in this movie are also really good. I've never been a big Owen Wilson fan, but I thought he was solid in this movie. He was believable as a father simply trying to protect his family in this horrible situation. And they made a smart decision with his character. When rebels break into their hotel building and they have to leave, the daughters are kind of defiant, not wanting to go. He flat out says "I'm not going to try to hide this from you. There are people trying to kill us." Most time, we see the parents lie to protect their kids, but I think this decision added a lot to Wilson's character, and shows that his priority is keeping his children alive rather than protecting their innocence. 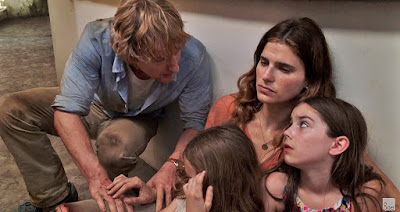 Lake Bell was also excellent. I think I ended up liking her character more than Wilson's. The dynamic in this family could have been that there's the helpless wife and children, and the brave strong husband has to protect them, but it wasn't like that at all. Bell was scared out of her mind, but so was Wilson, and it worked. It felt real. The children were also pretty good. I usually get really annoyed by child actors, but I didn't really feel that with these kids. There were some points where they got on my nerves, but overall they served a purpose in the story and they worked well.

Pierce Brosnan is in this movie, but I thought that he was unnecessary and I didn't like him in the film. He was the deus ex machina in the film where, whenever the family was in a situation they couldn't get out of, he would show up and save the day. He was an almost James Bond-type character, because he had weapons and was a badass. The comparison I make is that it felt like this was a Pierce Brosnan action movie, but told from the perspective of the family he's trying to protect. His character was a bit over-the-top, and I could have done without him in the movie. 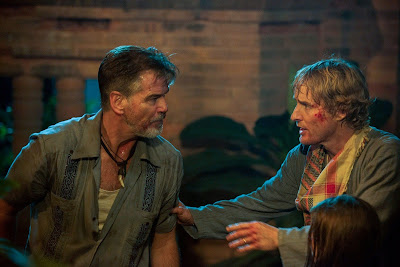 Overall, No Escape is a suspenseful, edge-of-your-seat thriller. You don't know where it's going to go as it follows this family just trying to stay alive. There are scenes that are so intense that you could feel it in the theater as everyone was watching it unfold. Wilson and Bell are really good in the movie, and the child actors are also good, though can be a bit annoying at times. However, Brosnan's character is unnecessary and distracting in the film, as all he is is the person who rescues the family from a situation they couldn't get out of themselves. But besides those small problems, No Escape is a really solid movie that you should definitely see if you like suspense thrillers.

What do you think? Will you see No Escape? Are you interested in the film? Leave your thoughts in the comments section below.