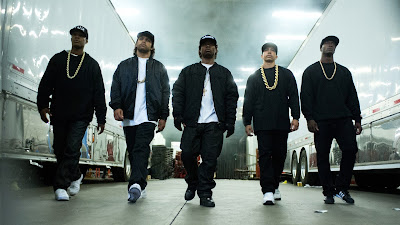 Straight Outta Compton tells the story of the group N.W.A. that formed in the late 1980's, which redefined the genre of rap music. Their raps were about police brutality, drugs and violence. The group began immediately getting backlash, receiving notices from the FBI and being harassed by the police, despite the fact they were exercising their first amendment rights. The story of N.W.A. brought a lot of attention to police brutality, which unfortunately has not changed to this day. The story of Straight Outta Compton is an important one that should be told today. As a film about police brutality, and about the genre of rap music, it succeeds to the fullest. But as a pure biopic, it falls a bit flat, since the presence of N.W.A. members Ice Cube and Dr. Dre as producers on the film show heavily with the whitewashing of true events that are conveniently left out of the film.

The movie starts out strong, with an unstoppable momentum. We see a group of friends-- nicknamed Dr. Dre (Corey Hawkins), Ice Cube (O'Shea Jackson Jr.), Eazy-E (Jason Mitchell), MC Ren (Aldis Hodge) and Dj Yella (Neil Brown Jr.)-- who freestyle and write raps for fun, realize that they actually have talent. After a hit song by Eazy-E, the newly formed N.W.A. meets Jerry Heller (Paul Giamatti), a record producer, who sees something special in the group and arranges a deal with a producer to get an album made. With hits like "Straight Outta Compton" and the highly divisive "F*k tha Police", N.W.A. hits it big, but not everyone sees them as revolutionary. People see their music as glamorizing gang violence, and disrespectful to the police and other authorities. 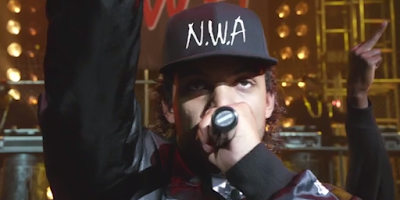 The first two acts of this movie are incredible. It has strength, power and a constant momentum that doesn't let up... well, at least until the third act. The characters are developed fully, and you get to see their life in Compton, and the life they're coming from. You understand why their lives are surrounded by drugs and weapons, because that is the unfortunate reality of Compton. These rappers come from nothing, and through their art they become something. And that always makes for a good story. The concert scenes are spectacular. You feel the excitement from the crowd, as well as the excitement from the group, as they realize that they're actually getting to perform in front of people. The Detroit concert was especially good, and you'll see why when you see it everything unfolds in the film.

Like I said before, this movie is strong as a reflection of police brutality. There are several powerful scenes where we see these people being so poorly treated by police because they are black. There's this one specific scene where the group is standing outside the studio, eating lunch, taking a break from filming. The police drive up and tell them to get down on the ground. They say that they work at the studio, but the police don't believe them, because how could black people be successful? Finally, Paul Giamatti comes out and starts screaming at the police, saying they can't attack people because their black. And, of course, the police do nothing to Giamatti, because he's white. It's a powerful scene, that's made official by the group saying this is something of a daily occurrence for them. And, that's how Ice Cube got the inspiration for "F*k tha Police". 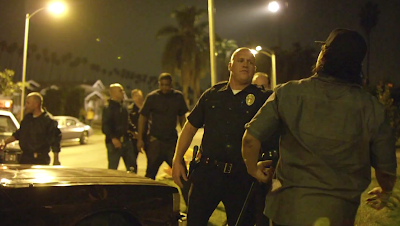 The acting in this film is fantastic. I was worried about O'Shea Jackson Jr., because he's Ice Cube's son and has never acted before. But he wasn't just decent in the film, I thought he was fantastic. He went above and beyond my expectations. I was afraid he would be a weak spot, but instead he became a strong point of the film, to the point that I'm glad they cast him instead of a more traditional actor. He was able to capture the look and presence of Ice Cube that I don't think some other actor could have done as perfectly. Corey Hawkins was great as Dr. Dre, and I thought he would end up being my favorite performance, but Jason Mitchell really stole it as Eazy-E for me. He had the biggest character arc in the film, and really shined. Like I said, all of the main characters were really well developed and were a highlight of the film.

Now, while the first two acts were incredible, the third act lost momentum. It wasn't bad, it just was unnecessary. There was a period of twenty or so minutes that was just going on and on and didn't even need to be in the movie. Other characters suddenly joined the film that were not needed, and the movie became bloated. But, it had a very strong ending where it recaptured the same magic that the first two acts had. If they had reworked the script a bit and had been more generous with editing, the film would have been stronger as a whole. So while I thought that most of the movie was phenomenal, that third act lost the momentum and kind of died down my excitement. 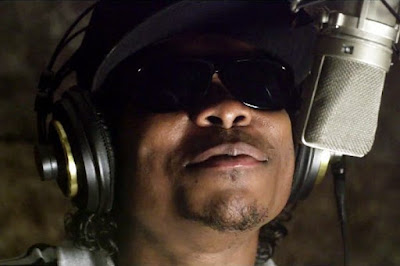 And with the real Dr. Dre and Ice Cube as producers on Straight Outta Compton, some things in history were glossed over and whitewashed. These people, who in reality were not good people, were made out to be heroes, when they actually did a lot of bad things. In real life, a woman had said some bad things about N.W.A. and Dr. Dre attacked her and beat her to the point she was hospitalized. And in this film, they make Dr. Dre to be almost the hero. There are several times he acts like a pacifist. There are specific beats conveniently left out of the biopic to make the characters look like better people. So the movie ends up falling a bit flat as a true and proper biopic.

I also didn't understand the passage of time in the film. The movie would jump around to all these different places and times, and I had a hard time keeping track of which scenes were consecutive in time and when they had jumped a couple months or a couple years. They should have been better about letting the audience know when they went forward in time. There were times when I was watching and I thought a scene that was happening had taken place the same day or the next day as the previous scene, but then I would get a clue that time has passed. If they had been better about that element, then it would've made the film more enjoyable. 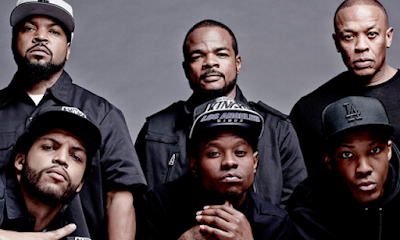 The stand-out line from this movie was during a press conference when a reporter asked the group why their art glamorize violence, and Ice Cube responded "Our art is a reflection of our reality". That is a line that defines this film. We see the world of Compton and where they come from, so that we can understand why their songs are the way they are. We see the rise and fall of N.W.A., and the companionship of these rappers is the strong point of the film. Once they drift apart, that's when the movie begins to drag into an unnecessary third act. The acting is phenomenal. O'Shea Jackson Jr. and Corey Hawkins are great as Ice Cube and Dr. Dre, but Jason Mitchell steals it as Eazy-E. Paul Giamatti is also good, but his character is a bit over-the-top at times. The use of the music in the film, specifically with concert scenes, is brilliant. The depiction of police brutality in the film is effective, and it really shows why this film had to be made today. However, the whitewashing of events kind of tarnished this film's reputation as a true biopic, and serves better as a reflection of police brutality and a film about rap music.

What do you think? Did you see Straight Outta Compton? Did you like it? Leave your (spoiler-free) review in the comments below.