I'm surprised not more people are buzzing and talking about Bridge of Spies. It's directed by Steven Spielberg, stars Tom Hanks and takes place during the Cold War. That has the Academy Awards written all over it! And it seems like this movie has gone completely under the radar. I really liked the first trailer. I thought it captured the gravity of the situation, and the emotion of the film well.  It really put this film on my radar. With us leaving the summer months and entering the Fall, or Oscar season, Bridge of Spies is definitely one of the top contenders. And now we have our second trailer for the film.

This second trailer does a lot of repeat business as the first. It again sets up the main conflict, introduces Hanks' character, why people are opposed to him and what's at stake. But while the first trailer simply ended there, this one goes deeper into the emotional side of the story. We see more of why Hanks feel unprepared to take on such a massive responsibility, and why exactly people are against this decision by the United States. It gives us a more rounded look at the film, and why this is important. I think this movie has a lot of potential to be powerful and a strong Oscar contender. Spielberg rarely drops the ball, and he may very well have a home run with Bridge of Spies. 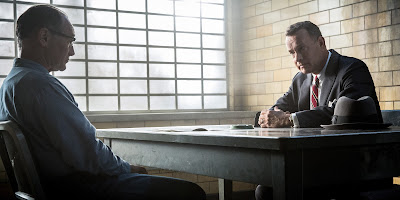