First Trailer for The Danish Girl

I have known this film would be a serious Oscar contender ever since I saw the first picture of Eddie Redmayne in costume as Lily, the first transgender person to undergo surgery to change their sex. He has such an ability to change his appearance in films, as clearly evident in his Academy Award winning performance as Dr. Stephen Hawking in The Theory of Everything (read our review for the film here). And The Danish Girl looks to be yet another example of Redmayne's incredible talent. This was a fantastic trailer. There was so much depth and subtlety in just the two minutes shown. You understood Redmayne's perspective, and why he felt so uncomfortable in his own body. Not only do I think this is going to be a brilliant movie, but I think it will be an important one, especially for everything surrounding LGBT issues in the world today.

And let me just say that this is the year of Alicia Vikander. She was excellent in Ex Machina and had a prominent role in The Man From U.N.C.L.E. This year, she is in six films: Tulip Fever, The Light Between Oceans, Burnt and of course, The Danish Girl. In one year, Vikander went from being a name no one had heard of to being an A-list, marketable talent. That is unbelievable. I really want her to be nominated for Ex Machina, but she could also have a shot for this film. Even though all I have seen is a couple images and one trailer, I believe The Danish Girl will be one of the top movies at the Oscars this year. I think Redmayne will be nominated and, if he wins, he will be the second actor behind Tom Hanks to win two consecutive lead actor Academy Awards. I think Vikander has a shot at being nominated, and the film may be nominated for Best Picture. But that's a lot of presumption based on very little. We'll have to wait and see how the movie turns out. But overall, I thought the trailer was extraordinary, and I can't wait to see this movie. 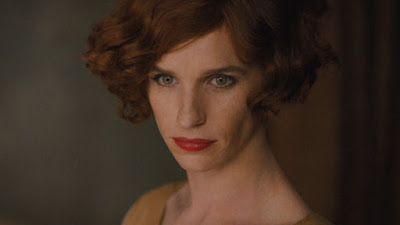 What do you think? Did you like the trailer for The Danish Girl? Are you looking forward to the film? Leave your thoughts in the comments section below.