First Trailer for The Jungle Book

Last month, Disney showed an exclusive first look at footage for their new upcoming live action film, The Jungle Book, at the D23 Expo. People came flocking out of the convention raving about the footage. You can read my coverage of the event here. At the presentation, director Jon Favreau said this was the most technologically advanced film ever, and that it was entirely shot on a sound stage in Los Angeles. With these bold statements, and the fact that everyone was losing their minds over this footage, I could not wait to see a trailer for this film. And now, we finally have it.

The first teaser trailer for The Jungle Book has been released, and it's awesome. This is some of the best CGI I have ever seen. Outside of Dawn of the Planet of the Apes and Avatar I can't think of CGI that I have been more impressed with. Shere Khan (Idris Elba), the tiger, looked real. The forest and jungle looked real. This CGI was photo-realistic, and now I totally buy Favreau's claims of it being the most technologically advanced film ever. Scarlett Johnasson's voice fit perfectly. The designs of Baloo (Bill Murray), King Louie (Christopher Walken), Bagheera (Ben Kingsley) and Kaa (Johansson) are all incredible. And even though I haven't heard it yet, the casting of Walken as the orangutan is absolute genius.

My only real complaint is that we didn't hear any of the other characters talk. The people at D23 got to hear Murray, Elba, Kingsley and Walken all talk, but we only heard Johnasson in this teaser. So that was disappointing. I was most looking forward to hearing Walken. But this trailer is gorgeously shot. The action looks fantastic. The spectacle of it is breathtaking. This is definitely one for IMAX. Anyone who has read me for a while knows how big of a fan I am of the original Iron Man, but this film has the potential to be Favreau's best movie to date. 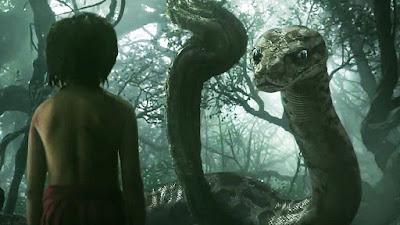 What do you think? Did you like the trailer for The Jungle Book? Are you looking forward to the film? Leave your thoughts in the comments section below.