In the Heart of the Sea- Trailer 3

Back around March, when Ron Howard's Moby Dick epic In the Heart of the Sea was supposed to be released, I was not looking forward to it. The trailers seemed boring, and the effects weren't convincing. Sure, it was Ron Howard and it had Chris Hemsworth as the lead, but I just never bought into it. It never interested me. Then, the film was moved to December because the studio thought it had Oscar chances. Whether it does or not is yet to be seen, but it's given me some time to become reinvested in the film. And now we finally got our first trailer since the movie's delay.

This is the best trailer I've seen for Sea, but I'm still not bought into it. I like a lot of elements in it. The design of the whales are good, and Hemsworth looks great in the role. But my biggest problem with this movie is the idea behind it. All of the trailers have said that this is the "true story that inspired the myth of Moby Dick", but the trailers are making this film out to be highly sensationalized. This looks like the fictional story of Moby Dick rather than the true story behind it. And from watching the trailer, I don't see what is different from the story Moby Dick and this "true story". It feels like that it's a marketing tool to simply throw the words "true story" in the trailers and on the posters. Maybe it will be different when I'm sitting in the theater watching the film, but from my perspective right now, I am very confused and not very interested in this movie. 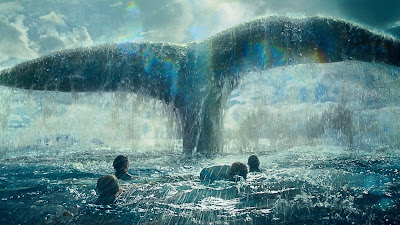 What do you think? Did you like the trailer for In the Heart of the Sea? Are you looking forward to the film? Leave your thoughts in the comments section below.