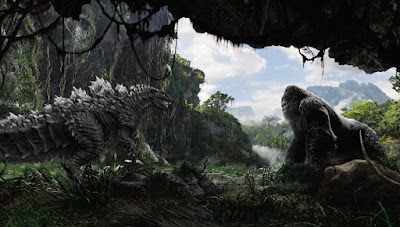 For over a year now, Universal has been hard at work on Kong: Skull Island, a prequel(?) to the story of King Kong. The movie has gone through several casting changes and whatnot, but is moving full steam ahead for a March 2017 release date. On the same side, Warner Bros. is working on a sequel to 2014's Godzilla, with a 2018 release date in place. This would allow for director Gareth Edwards to return to the franchise, after helming Star Wars Anthology: Rogue One next year. With both franchises in production, it has had many fans wonder if we could eventually see a crossover. The main problem with that has been that Universal is producing Kong, while Warner Bros. is producing Godzilla. However, that problem may no longer exist.

The reason for this movie is reportedly to have a crossover between the two characters, after the stand-alone films in 2017 and 2018.

Now there's a bigger issue that arises with a crossover. In Godzilla, the monster is 355 feet tall. In Peter Jackson's King Kong, the monster is 25 feet tall. That's a big discrepancy. So what's going to happen is that Kong is going to have to do some monkey steroids and get pretty damn big. Obviously this won't be the same Kong as we saw in the Peter Jackson film, but that is around the size we have grown accustomed to for the monster. So Kong is going to have to do some growing. He doesn't have to be as big as Godzilla, but at 25 feet Godzilla can simply step on him. Kong will have to be at least 200 feet tall, if not closer to 300 feet. That means Kong is going to be pretty damn big in Skull Island, bigger than we've ever known him to be.

Now, Godzilla 2 may also shrink Godzilla a bit so he's not so massively big. But they can't shrink him too much or else it will be a visual continuity problem. If they get Godzilla down to 250 feet, and make Kong around 150 to 200 feet tall, then it's a bit more even. But that's for the production teams to figure out. Outside of the size issue, I would love to see a Godzilla vs. King Kong movie. Shall we call it, Godzilla v. Kong: Dawn of Monsters? It is a Warner Bros. movie, so they could get away with it. Maybe I'm being too hopeful.

What do you think? Is Legendary moving King Kong over to Warner Bros. a good move? Are you looking forward to Kong: Skull Island? What about Godzilla 2? Do you want to see a Godzilla versus King Kong crossover movie? Leave your thoughts in the comments section below.