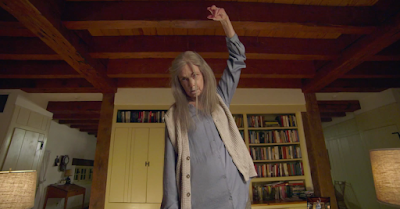 When you think of M. Night Shyamalan these days, you think of plot twists, bad acting, trees as villains and just really bad movies. Whether that is unfortunate or not is up for discussion. But to put it kindly- Shyamalan has not been on a roll lately. I have only liked two of his films. The Sixth Sense is a brilliant movie, a cinematic masterpiece and is in my top ten of all time favorite movies. Unbreakable was a good movie, but wasn't outstanding. I did not like Signs. The Village was horrendous. And The Happening was its own class of horrible. And neither fans nor critics have liked his other films, such as Lady in the Water, The Last Airbender or After Earth. So with Shyamalan's latest film coming out, called The Visit, I gave him no benefit of the doubt. I didn't like the trailers, and I thought this was going to be another sh*t Shyamalan film. But as the movie got closer, people began to buzz about it, saying it was the director's return. So I started to get excited. Could this be Shaymalan's return to the greatness he showed in The Sixth Sense? Short answer: it's not. But it's the best movie he's put out in a while, even though that's not saying much.


The Visit tells the story of two young kids, Becca (Olivia DeJonge) and Tyler (Ed Oxenbould), who go to visit their grandparents for the first time while their mom (Kathryn Hahn) goes on a cruise trip with her boyfriend. But as the kids spend their time with their Nana (Deanna Dunagan) and Pop Pop (Peter McRobbie), they quickly realize that something really weird is going on. And before I get into what I liked and didn't like about this movie, I should point out that there was this large group of ten year olds in the theater who were out of control during the film-- talking, laughing, yelling. It got to the point where security tried to get involved and I, among others, asked for a refund. So maybe their presence altered my opinion or enjoyment of the film a bit, I'll acknowledge that, but I still think my thoughts on the film are as objective as they can be. 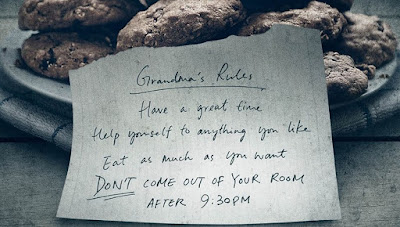 I don't like a lot of found footage films. The Blair Witch Project made the style mainstream, really turning it into a subgenre, especially for horror films. Most of the time, found footage is used to cover up a low budget. It's done because it's cheap and easy to do. It's a cop-out. I liked Blair Witch, as well as Chronicle and End of Watch, but those are the only found footage movies I've seen that I think really work. Whenever I watch a found footage movie, I always ask myself, with every scene, "Why would someone be filming here?", "What would make them film this"? And 99% of the time, there's no logical reason. When the monster is chasing you, you don't film it. You drop the camera and f*cking run! However, The Visit introduced an interesting story device that answered that question for most scenes. Becca is an aspiring filmmaker. Since her mother and the grandparents are estranged, she is documenting this visit in order to try to bring them back together. I thought that was a great idea of Shyamalan's, as it explained why they were filming every single little thing.

I also thought the film had a good twist. I didn't see it coming, and it improved my thoughts on the movie. And I thought the performances were decent. They weren't like traditional low budget horror films, where you get awful actors. They weren't outstanding, but they supported the film and elevated it. For an actor, that's all you can really ask from them. I generally have a thing against child actors-- usually they really annoy me. But it seems Shyamalan knows how to work well with child actors. Haley Joel Osment in The Sixth Sense is the best child actor performance I've seen, and Shyamalan has proven throughout his films that he can get good performances out of kids. And he does that again with this film. Sometimes Tyler's rapping and Becca's advanced vocabulary would get on my nerves, but overall they were good in their roles. Apparently, they're both Australian actors and they pulled off American accents flawlessly. 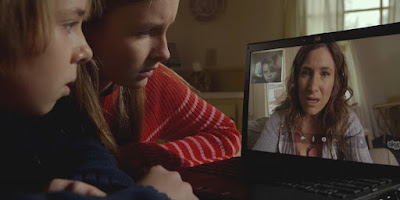 But that's really where the positives end for The Visit. What this movie struggled with most was that it had an identity crisis. It was trying to be two different movies in one, and I think it would have benefited tremendously if it had done so. One film's about a daughter trying to rekindle the relationship between an estranged daughter and her parents. And the second film's a horror movie. The tone was all over the place for this film. It would have these really dramatic parts that were very well acted and, on their own, great scenes but didn't have the same effect because they felt out of place. Until the twist, I did not find this movie scary or even creepy at all. Most of the obvious horror attempts just seemed stupid. So I would sit there and watch a bunch of stupid "scary" scenes happen, and then it would go to a dramatic part that was meant to further develop the characters, and I just wasn't invested. This movie could have been a fantastic drama, with the plot I explained earlier, but the dramatic elements were lost in the desperate attempts to be scary.

Going into the film, I had heard that this was more of a horror comedy, where we were laughing with Shyamalan rather than at him. But I saw no evidence of this at all. What I saw was a genuine attempt at horror that just fell flat. Sure, it had some comedic moments, but so does any film. This was not a horror comedy, and I think anyone saying that is just trying to justify it. The horror doesn't even work, for me at least, until the twist happens. After that reveal, which I thought was really good, the horror level is cranked up a notch, and it finally works. But what makes a good twist is being able to go back into the film and see all the little hints at that twist. Everything is explained. The twist is the bow that wraps up the movie. That's what made The Sixth Sense's twist so fantastic and brilliant. But reflecting on The Visit (at least after one viewing), there are still parts of the movie that don't make sense with the twist in place. You still have questions, which shouldn't happen with a twist. 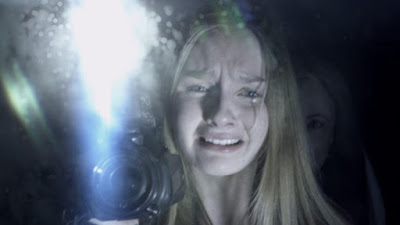 Overall, The Visit is a (seemingly) earnest attempt by M. Night Shyamalan to revitalize his career. He goes back to a smaller budget and his horror roots. But still he runs into a lot of the same problems that has plagued many of his films. While the use of found footage was great, the film was well acted and it had a good twist, there were many glaring problems with the movie. The horror didn't work until the twist, and the tone was all over the place. Because of this, the excellent dramatic scenes lose their power. This movie suffers from an identity crisis, and it feels like it should have been two different movies. The idea of it being a horror comedy doesn't really work in the context of the film and, while the twist is good, it leaves several things unexplained. This is not a good movie, but it's the best one Shyamalan has given us in a while.

What do you think? Did you see The Visit? Did you like it? Leave your (spoiler-free) review in the comments section below.