This is the seventh installment of this editorial series where I basically take a movie and pick my personal five favorite scenes from that movie. Then, you can go into the comments and say why you either agree or disagree with me. For this article, I will be doing Swingers. Warning- there are spoilers!


(Make sure to check out our other "Top 5 Favorite Moments From" for The Dark Knight Rises, The Matrix, Rise of the Planet of the Apes, The Avengers, The Shawshank Redemption and The Wolverine- all right here) 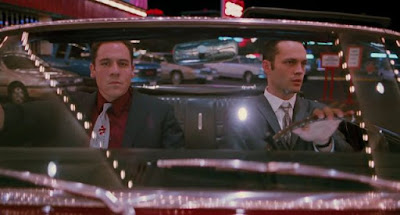 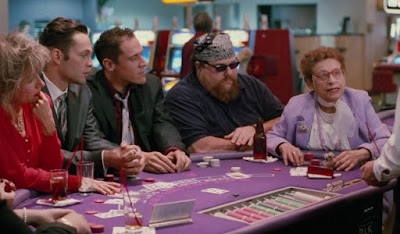 After finally convincing Mike (Jon Favreau) to leave his apartment after the break-up of a six year relationship, Trent (Vince Vaughn) takes his depressed friend to Vegas, hoping to cheer him up. The two walk into the casino wearing suits, with hopes that they can score some "babies" by acting really tough and rich. They pick a table and sit down. Mike puts down three hundred, all that he has, in order to play but doesn't want to spend it all. To their horror, Trent and Mike find out this table has a one hundred dollar minimum, and is far beyond their playing level. Determined to keep up their suave and macho appearance (though are miserably failing at it), the two stick with it and double down, losing.

I give a lot of props to Favreau for this movie, because his script is fantastic. This movie is funny, heartwarming and tragic all at once. And Favreau's distinct style shines in this scene. He perfectly wrote this scene to be awkward and uncomfortable, because Trent and Mike were so out of their league playing at this table. And the abrupt cut to the second table was great editing. That cut elicited laughter on its own, and it's because of how that table was set up earlier in the scene. The writing for this scene was spot-on, and it works to make this a memorable and funny scene. 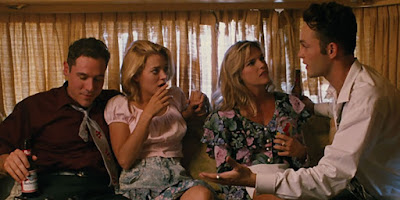 After meeting a couple girls at the casino, Trent and Mike go back to their "house" (an RV), trying to hook up with them. The scene opens to Trent telling this elaborate and outlandish story about an audition he had as an actor. During the entire story I was questioning whether it was true or if he was making it up, and by the end of the movie I still don't know. But that story perfectly sets up what kind of character Trent is without giving us a lot of exposition. After the tale, Trent's date goes to give him the "full tour", and they begin to make out, leaving Mike with his date. Before things go any further, Trent takes a quick look to see how Mike is doing. He sees what looks like them kissing, so he contently goes back to his date. In actuality, Mike and his date are talking about the relationship Mike has just gotten out of.

This scene serves several purposes. It shows what kind of friend Trent is. Not only is he wanting to sleep with girls, but he wants to make sure his friend is doing well too. Because ultimately, Trent is trying to get Mike out of this depressed slump he's in. This also gives us a look at Mike's character, and just how miserable he is. He has an opportunity to sleep with this girl, but he is just too upset over his breakup. Unlike Trent, girls aren't the first thing on Mike's mind. Later in the movie, Mike says that he respects women too much to constantly through himself at them, like Trent does. Trent is all about living it up and moving from one girl to the next and being "money", but Mike likes commitment. He isn't as shallow as Trent, and would rather pick one girl and stick with her. You understand a lot about both these characters' personalities through this scene. 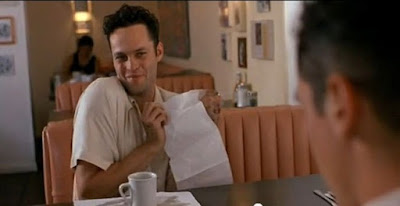 At the end of the movie, Trent and Mike are talking in a coffee house. In the middle of the conversation, Trent stops Mike, saying that there is a girl flirting with him. Across the room, a woman is looking at Trent, making faces and playing cute. Trent begins do the same, saying he is getting "good vibes" from this girl. After about a minute or two of flirting, the girl stands up and Trent gets ready for her to come over to their table. But she grabs her baby, who was sitting in the chair across from her and walks away. Trent, feeling humiliated, sinks into his seat as Mike laughs. The movie then ends.

This was a perfect end to the film. I laughed really hard when this happened, and it was directed perfectly. A lot of the comedy in this movie is based off of people's wrong assumptions. Someone thinks something and goes into a situation confident in their assumption, only to figure out that they're wrong or the audience is misled. This kind of humor is used throughout the film, and the direction by Doug Liman makes this comedy effective. 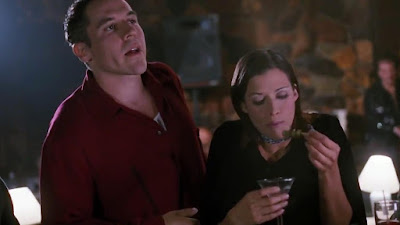 After getting a girl named Nikki's number at a bar, Mike goes home. His friends have told him to wait a few days to call so that he doesn't seem desperate, but he decides to call right then at 2:30 in the morning. Mike leaves a message, but the answering machine cuts him off so he calls again. In the middle of leaving a second message, he is cut off again and proceeds to leave a third message. This happens over and over again until, about seven messages in, Nikki picks up the phone and tells Mike never to call her again.

This scene is comedic gold. Favreau handles this scene perfectly with his timing and what he says. As an audience member, you feel the awkwardness of the situation as Mike calls over and over again. Repetition in comedy is something that requires a really good director, and Liman brings it yet again in this scene. The fact that you can feel as uncomfortable as you do while also laughing at the situation is a testament to how good the script was, how good the scene was and how good the scene was acted.

Dancing: After meeting and hitting it off Lorraine, Mike is asked by her to go dance. He is reluctant but she eventually convinces him. He starts off being really awkward, but soon gets into it, and becomes a fantastic dancer. This is a great scene because we see Mike coming into his own a bit.
Our Little Boy Has Grown Up: Early in the morning, Mike sits in a diner with Trent and Rob, and he tells them that he got the girl's number. Trent begins obnoxiously yelling, clearly drunk. When Mike tells him to shut up, Trent climbs on top of the table, yelling to everyone in the diner that their "little boy has grown up".
Michelle: After waiting for so long for his ex to call him, Michelle calls Mike. He starts off talking to her, and it's as if a dream has come true. But Lorraine calls on the other line and Mike hangs up with Michelle to talk to Lorraine. This scene was a great indicator of the growth Mike has experienced throughout the film, and his character arc.
GoodFellas: To get into a bar, Trent and Mike go through a secret entrance, through a kitchen in which they shake people's hands and say hello. This scene perfectly mirrors a famous scene from GoodFellas, which is mentioned periodically throughout this film. It was a great tribute scene. 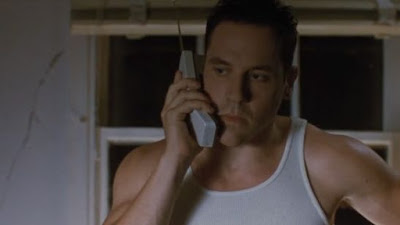 After Sue (Patrick Van Horn) goes off on Mike, saying that he "hasn't gotten laid" since he moved out West, and that he's a loser, Mike becomes a depressed recluse. After a couple days, Rob (Ron Livingston) drops by Mike's apartment to cheer him up. Rob walks into see Mike, unshaven, wearing a stained undershirt. Rob tries to cheer Mike up, by saying "All you look at is what you don't have. You never pay attention to what you do have." Through Rob's words, Mike wakes up and realizes that he needs to get his life together.

This is a fantastic scene, because it's the real emotional beat in the film. Everything in the movie accumulates to this moment, in which Mike's eyes are opened. And it's because of this scene that allows him to turn down Michelle when she calls later, because he has finally moved on and found someone else in Lorraine. The drama in this scene doesn't feel forced or overdone, but works in enhancing the film overall, and makes it a deeper movie. 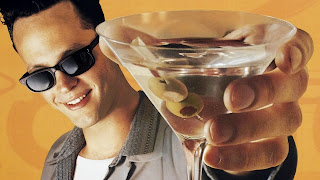 What do you think? Do you agree with my list? What are some of your favorite moments from Swingers? Leave your thoughts in the comments section below.