Trumbo is a movie I have been interested in since I saw its first trailer. It looks like this may finally be Bryan Cranston's big break into Hollywood stardom. He plays Dalton Trumbo, the highest paid screenwriter of his time who is blacklisted as a Communist in the 1940's. The first trailer made me think that this could possibly be an Oscar contender. Though it tells a story from Hollywood's dark past, it looked like everything the Academy likes in a movie. But with so many other big releases coming out, it seemed very likely that Trumbo could get lost in the crowd. But now we have our second trailer, and I no longer think that. This film is in it to win it.

This is a fantastic trailer. It gets into Trumbo's psychology, and delves into his character. He is played up to be a selfless hero, but then that is flipped. Is Trumbo really willing to sacrifice what he has to do what's right, and fight an injustice? By the end of the trailer, I wasn't so sure. This film looks perfectly like a period piece. I felt like I was exactly in the time period, and the design is impeccable. Cranston looks entirely transformed, and all the actors look like they are accurately from their time period. The only one who stood out was Louie C.K., who looks more like Louie C.K. rather than his character. But the story sounds great. It visually looks really good. Cranston looks fantastic. I think this is going to be one of the big Oscar contenders of the year. Cranston may very well get nominated. The film may get nominated for Best Picture. I can't wait to see this movie. 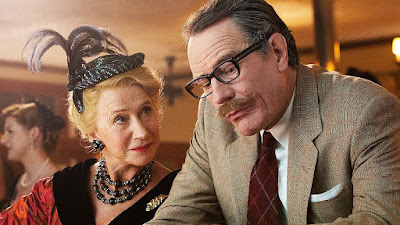 What do you think? Did you like the trailer for Trumbo? Are you looking forward to the film? Leave your thoughts in the comments section below.