First Trailer for London Has Fallen

Though it was kind of a throw-away action film, I rather liked Olympus Has Fallen. It's not one of the great action movies by any stretch of the imagination, but it is a decent film that's enjoyable to watch. The main characters were (for the most part) three-dimensional, and the gritty action was well done. So when I heard there was a sequel in development, titled London Has Fallen, I was looking forward to it. It could be a cool movie to watch one weekend when you don't have much going on, and you just want to watch some mindless action. With that in mind, the first trailer for London Has Fallen has dropped, and it's actually pretty good.

It's very reminiscent of the style of the first film. I felt like I was right back with Gerard Butler, Aaron Eckhart and Morgan Freeman. Sure, it kind of repeats many of the story points of the first film (the President is in danger, the United States is in trouble, Butler has to kick ass), but it's an enjoyable rehashing of events. It feels like this movie will be fun, and that's what I really want it to be. The stakes seem to be bigger, and it looks to be more of the same in a good way. Overall, I'm looking forward to London Has Fallen. It won't be anywhere near my top films of 2016, but I'm sure it will be one I'll have fun watching. 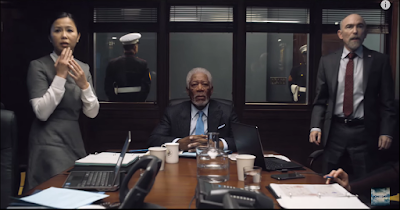 What do you think? Did you like the trailer for London Has Fallen? Are you looking forward to seeing the film? Leave your thoughts in the comments section below.

Written by: Nate
Email us your movie questions at: themovieparadise999@gmail.com
Like us on Facebook and Follow us on Twitter @movieparadise99
aaron eckhart gerard butler london has fallen morgan freeman nate olympus has fallen trailer