Deadpool is officially my most anticipated film of next year. I love the comic book character, and from everything we've seen, it looks like they've gotten this character right! I have a feeling this is going to be one of the most surprising and best movies of next year, and could quick off a whole era of R-rated mainstream comic book movies. There is so much hinging on this film, and I think it looks incredible. Now, a new redband has dropped for the film. Technically, it dropped on Christmas Day, hence some of the jokes, but I've been busy this holiday season with family and whatnot and I haven't gotten around to posting on this site. But now I'm here, and so is the Deadpool trailer.

This trailer is even better than the first one, and I loved the first one. The jokes are funnier. The action is better. It's even more vulgar and more outrageous. This trailer also really cements for me why Ryan Reynolds is perfect for this film, and this character. His timing is on point, and he brings a great comedic energy to the character. I was originally nervous about director Tim Miller, since this is his directorial debut, but everything looks great from these trailers. I think he's going to knock this out of the park! The supporting cast looks great too. Colossus (Andre Tricoteux) looks especially good. They seem to have refined his CGI more in this trailer, and he's exactly what I want the character to look like. Colossus was always one of my favorite X-Men characters, and it's great to see he's finally Russian. Weasel (T.J. Miller) also looks great too. In the last trailer, his running jokes about Wade Wilsons's new face didn't exactly land with me, but his joke in this trailer worked. Deadpool himself also has many great lines. While I loved the last trailer, this one surpassed it, and is everything I wanted it to be. I just hope the movie lives up to be as great as the film's marketing. 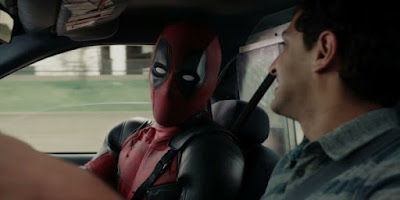 What do you think? Did you like the trailer for Deadpool? Are you looking forward to seeing the film? Leave your thoughts in the comments section below.