When Entertainment Weekly put out our first official look at X-Men: Apocalypse, many people voiced their complaints about the look of the titular antagonist, played by Oscar Isaac. While I wasn't all up in arms about it like others were, I was disappointed with the design. He could have looked a lot more badass then he did. So when the first official trailer for the film was announced, there was hope that maybe the filmmakers had improved upon Apocalypse. They had time to fix things before dropping the trailer. So did they fix their villain, or did they just leave him the same?

They definitely did improve him. It's clear that they listened to fans' complaints. He's more blue, rather than purple, and they definitely bulked him up more. I think the design of him looks fantastic now, and I am very excited to see him in the film. This trailer, overall, is a great trailer. It's powerful, epic and gives us a lot of the same (in a good way) while also being completely new. The latest mutant editions look awesome. I am excited to see younger and reinvented versions of Storm (Alexandra Shipp), Cyclops (Tye Sheridan), Jean Grey (Sophie Turner) and Nightcrawler (Kodi Smit-McPhee), as well as returning characters Professor X (James McAvoy), Magneto (Michael Fassbender), Mystique (Jennifer Lawrence) and Beast (Nicholas Hoult). McAvoy especially looks good at the end of the trailer with a (finally) shaved head. 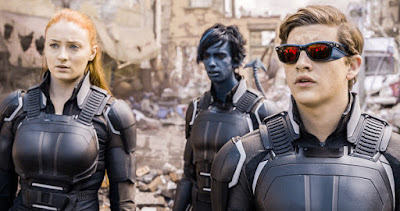 This trailer perfectly sets up Apocalypse. A lot of the dialogue establishes him as almost the Anti-Christ. The part where Havoc (Lucas Till) says Apocalypse got the idea of the four Horseman from the Bible, to which Moria (Rose Byrne) responds "Maybe the Bible got it from him." That was a great exchange. The scale and stakes of this film also look incredible. They're not kidding around when they say he is Apocalypse... this looks to be the end of the world. What we didn't really see in this trailer at all was Wolverine (Hugh Jackman), who still isn't officially confirmed to be in the film, but we're all assuming at this point he will be. Also, none of the original cast members were shown in the trailer, so it's not sure if they'll play a part in the movie at all. But overall, this was a great trailer, and I can't wait to see this movie!

Also, the first real poster for the film was also released, which you can see below. 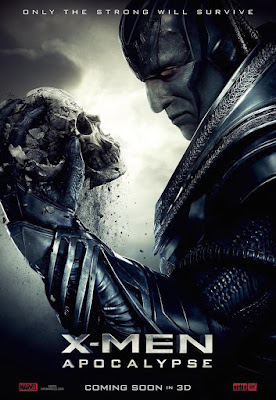 I love this poster. It gives us another good look at Apocalypse and the changes they made to him look great. This poster really shows his power and authority. Not only his he crushing a skull in his hand, but the words "only the strong will survive" are printed above him. That is a great tagline, and it's true to the character. After seeing such an awesome trailer, I became even more hyped with this poster. Other than the EW pictures, this movie has done a fantastic job with marketing so far. I am very excited to see this movie. I think it has a chance to surpass X-Men: Days of Future Past, which is my favorite X-Men movie to date. But we'll just have to wait and see the movie. 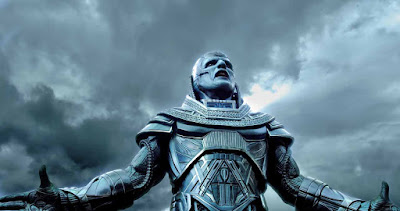