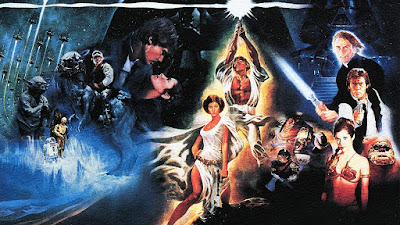 This is my review for Star Wars Episode VI: Return of the Jedi. You can read my reviews for A New Hope here, and for The Empire Strikes Back here. Keep in mind that there will be spoilers. 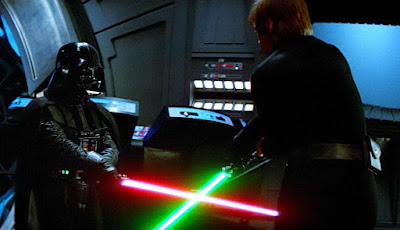 When Return of the Jedi begins, everything is left in chaos from the cliffhanger ending of The Empire Strikes Back. Han Solo (Harrison Ford) is frozen in carbonite. The Rebel alliance is weak under the mighty fist of the Empire. But between the films, Luke (Mark Hamill) has grown into a far more wise Jedi Knight, and thus concocts a plan to free Han Solo from the grips of Jabba the Hutt. After reuniting the team, they set their course to Endor, a forest planet that houses the generator of the Empire's shielding device protecting their second Death Star. The Rebel alliance coordinates an attack to take out the shields and destroy this new Death Star. At the same time, Luke must confront Darth Vader and the Emperor (Ian McDiarmid).

I consider this film to be the weakest in the trilogy. Empire capitalized on the characters, and created a compelling story around them and their development. Jedi didn't capture that same feeling. Instead, it took on a very childish, cartoonish feel. It starts with many of the characters introduced in Jabba's palace. They felt out of place and very hokey. It continued with the Ewoks, which take up a major part of the film. They were overly cutsey, and it just didn't work for me. It also felt like the filmmakers were shoving the Ewoks down our throats, because they were on screen every chance possible. Empire was a much darker, more serious film. And Jedi relapsed into becoming the closest prequel film of the original film. (I mean in tone. The film itself is far superior to the prequels). 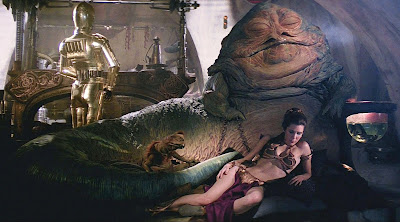 The strongest part of this movie is the continuous development of Luke, and the redemption of Darth Vader. Luke has come into his own as a Jedi, and takes on a new task: to save is father from the Dark Side. Even though you never see Vader's face (until the end), you can almost feel his facial expressions during some of the conversations between the two. This is the film where you don't just see Vader as the big bad guy, but you get a lot more depth and humanity out of him. You are also introduced to the Emperor, who is the true epitome of evil. And it is when the Emperor reveals his true plans for Luke that Vader makes the change to the good side.

The action in this movie is great. The space battle trying to destroy the Death Star was fantastic. The speeder chases on Endor was awesome. We got the best lightsaber duel of the entire trilogy between Vader and Luke. This movie also has the best special effects of the original trilogy. That may also have to do with the fact that it is the youngest of the three, and had more technology and a bigger budget available to it. These are all positive elements of the film. 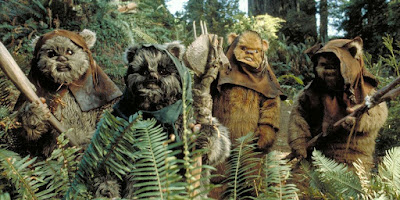 But I have to say that the Ewoks really brought this movie down for me. I understand the filmmakers wanted to show something different: have a primitive and sheltered culture interact with the high stakes galactic war that they are utterly unaware of. I get that, and it's a great premise to bring into the third film. But the characters themselves were far too goofy and silly to fit into a Star Wars movie. If they had a different species that was a lot more serious, then this film would have been a lot better. If the rest of the movie was serious, you could get over the cartoony Jabba scenes, but to have those followed by Ewoks for the rest of the movie was too much.

Overall, Star Wars Episode VI: Return of the Jedi is a strong finish to the original trilogy, but only when it follows Luke and his journey. The film is overshadowed with cartoonish and goofy characters that bring the film down. Jedi's strength, however, is the story following Luke and how he brings the Anakin back in Darth Vader. The action and special effects are great, and the acting is on point as well. This would have been a much better movie if the craziness and child-appealing scenes were toned down in favor of the darker and more serious tone of The Empire Strikes Back. 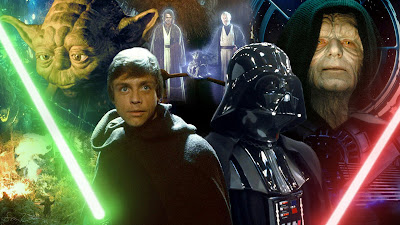 What do you think? Do you agree with my points on Star Wars Episode V: The Empire Strikes Back? How has this film impacted you? Leave your thoughts in the comments section below.