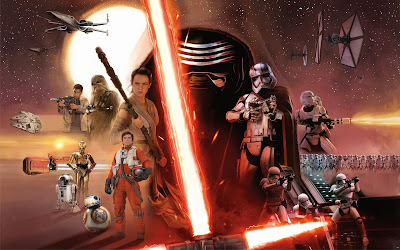 Star Wars Episode VII: The Force Awakens has been my most anticipated film of 2015 for the better part of the year. So many questions hung around this film. Would it be good? Would it be the return of Star Wars? Would it break Avatar's record and become the highest grossing film of all time? You can read all about my box office predictions for the film from all the way back in October here. This movie was ensured to be a financial success. Regardless of how awful the film could have been, it was going to make money. But I don't care about the money. I'm not getting any of it; in fact, I'm spending it. I care about if the movie is good or not. So when I walked into the theater, losing my f*cking mind with excitement, all I could do was pray that this movie would be awesome. And, in short, it is.

To prepare for The Force Awakens, I re-watched A New Hope, The Empire Strikes Back and Return of the Jedi. You can read my thoughts on all three of those films here. I am so glad I did, because I felt like I entered The Force Awakens with a much more clear understanding of what Star Wars is, and what I like about it so much. Prior to re-watching the original trilogy, I hadn't seen the films in a long time, so it was great to re-experience the magic. But I also walked into The Force Awakens with certain things in mind. I was looking to see if the design of the crawl text was the same. Would a character say "I have a bad feeling about this", as has happened in every film prior? Re-watching A New Hope especially was good, because that is the film that The Force Awakens essentially is. But I'll get into that later. 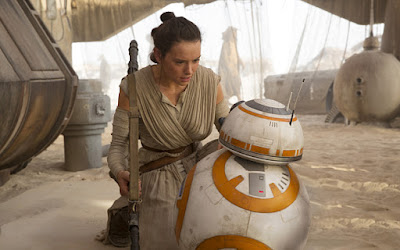 The Force Awakens is first and foremost a visual spectacle. I saw this film in IMAX 3D, which is how is should be viewed. It is glorious to watch, and you are immediately immersed into this world. J.J. Abrams elegantly captures the spirit of the original trilogy, while also taking advantage of modern effects and technology. Abrams takes a step back from the blue screens and CGI-everything of the prequels, and reintroduces the prosthetics, puppets and animatronics of the original trilogy. With A New Hope, some of the practical effects didn't look as realistic because of the lower budget, but with The Force Awakens, it's all top notch. These characters feel more realistic, and you get a more genuine performance out of the actors, who actually have something physical to act with.

The performances are all really good in this movie. A New Hope struggled with lackluster acting, mainly due to George Lucas's hands-off directing approach, but The Force Awakens has strong performances by John Boyega, Daisy Ridley, Oscar Isaac and Adam Driver. They bring a liveliness to the film, and are fully realized and developed as three dimensional characters. A lot of credit has to be given to the screenplay. It is a fast-paced film, and does its best to help you keep up and not get lost. It perfectly recaptures the magic of Star Wars, and infuses the old with the new in the best way possible. It is also very funny, using Abrams signature type of humor that he incorporates into films like Star Trek so well. 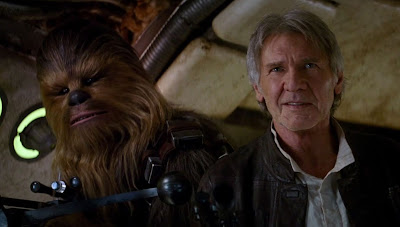 The best part of this movie for me was Han Solo (Harrison Ford). He is the most featured of the returning original cast, and he has a prominent role in the film. Ford really brings it in this movie. When I was watching, I never felt like I was watching just Harrison Ford on screen, but rather I was watching an older Han Solo. This movie also develops his character more, and presents us with the logical evolution of Han that would have taken place within the thirty years after Return of the Jedi. He's still "scruffy", and has all his signature aspects and attributes, but is also wiser and not nearly as stubborn. He has grown as a character, and that was good to see. Ford really stole the film whenever he was on screen, and he was by far my favorite part of the movie.

I also liked the different take on a villain this film had with Kylo Ren (Driver). He wasn't your typical maniacal, laughing-while-he-gazes-from-afar type villain, but much deeper and more rich. And he was definitely not just a Darth Vader knock-off. In many ways, this was just the first stage in his character. He's not a cemented villain: he has several points where he goes off on childish tantrums. Over the course of the trilogy, I think we will see his character continue to develop and evolve into a far more menacing villain by the end. I do think, however, he took off his helmet too many times, which took away the ominousness of the character. There is only part near the end (and if you've seen the movie, you know what I'm talking about) where his helmet should have been off. 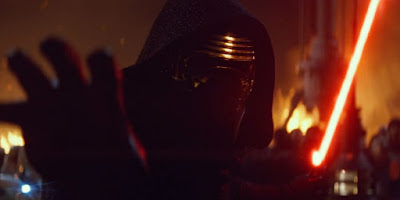 I do have some problems with the film. The Force Awakens is pretty much a carbon-copy (no pun intended) of the story for A New Hope, beat by beat. I understand that Abrams wanted to reuse a tested product, but he went back to that original formula too many times for me personally. It got to the point where it detracted from the film, and became almost lazy writing. The story itself could have been strengthened and been more concrete. I also did not care for the design of Supreme Leader Snoke (Andy Serkis). I thought Serkis' voice for the character was great, but the design was disappointing. Using motion-capture, they could have done so many cool things with the villain, but they made him overly human in appearance. This was disappointing, as one thing I was really looking forward to seeing was Snoke's look.

I also had a problem with that pretty much anyone who picked up a lightsaber suddenly knew how to use it in combat. It was needed for the story, but there was just no explanation as to how these characters could be so good at using this weapon with zero training. I also thought that many developments in the story and characters were forced. They were moved along in order to progress the movie, instead of coming about naturally. This film could have slowed down a little bit, in order to make certain character realizations and plot points come about in a better way. There were also aspects of the film that were part of the marketing that had little to do with the movie. The Starkiller base (which is pretty much a third Death Star) is underused and not set up very well. Captain Phasma (Gwendoline Christie) is criminally underused, and doesn't have nearly enough screen time. Max von Sydow's character is not even an appearance, but rather a cameo. I understand there was so much to introduce, but for these to be featured prominently in marketing and then to be pretty much non-existent in the film was a poor choice. 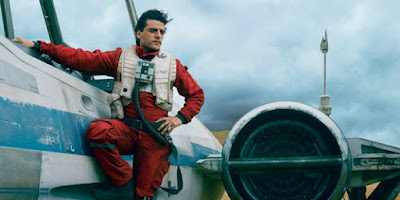 Overall, Star Wars Episode VII: The Force Awakens is the true return to Star Wars. It does what the prequels never did, which is it understood what people loved so much about the original films and it hearkens back to that magic. Its use of practical effects enhances the film tremendously, and allows for a true immersion. The script is very well written, including a lot of J.J. Abrams' classic comedy that works really well in the film. The characters are well written, and the actors give great performances. Harrison Ford as Han Solo stands out as the main highlight for the film, and is a great return for the character and the actor. However, the story itself was weak, and the movie borrowed too heavily from A New Hope. Certain character realizations and decisions were rushed in favor of progressing the film, and didn't feel natural. But in the end, The Force Awakens is a visual feast that will thrill and excite old and new fans of this classic franchise. 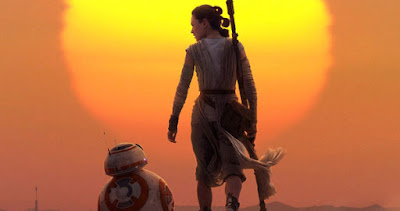 What do you think? Have you seen Star Wars Episode VII: The Force Awakens? Did you like it? Leave your (spoiler-free) thoughts in the comments section below.