This really came as a surprise. Without anyone knowing, producer J.J. Abrams and the whole team at Bad Robot were hard at work on a sequel to the found footage film Cloverfield. No one even knew that a sequel was in the works. Alongside the release of Michael Bay's latest film, 13 Hours: The Secret Soldiers of Benghazi, the trailer for this mystery film dropped. The movie is directed by first-time director Dan Trachtenberg, and stars John Goodman. A description reads:


"The majority of the movie takes place in an underground cellar, and revolves around a young woman who wakes up in the cellar after a severe car accident and fears she has been abducted. Her captor, a doomsday prepper, tells her he saved her lifer and that there has been a terrible chemical attack that has left the outside world uninhabitable. She does not know what to believe and as tensions rise, she decides she must escape, regardless of the terrors that await outside."

That was the description for the film Valencia, which was the Bad Robot project Abrams and Trachtenberg was working on. But now we know that Valencia was a fake name and it was actually a Cloverfield sequel. The description is apt of the trailer, which promises a heart-pounding and exciting claustrophobic thriller. There are a couple interesting things about this project. First of all, Cloverfield was found-footage while this is more traditionally filmed. Plus, it doesn't look to be a direct sequel of the movie, but rather another story told in the same world. I think it's a very interesting idea, and could make for a really good movie. My only hesitation is why this needed to be related to Cloverfield. The trailer may be holding back the connections, but there is nothing that really screams Cloverfield to me. If this movie can skillfully weave in the events and creatures of Cloverfield while also telling and new and radically different story, then I'm all for it.

It's surprising that this movie is only two months away now. I don't know how Bad Robot kept this under wraps, but they did one hell of a job not letting anything slip. Now we just have to see if the movie is any good. But hopefully the title isn't an indication of the quality of the film, because I think it's a stupid title. I hope the film has a meaningful reason, pivotal to the characters or story, for why this is the title. But as it stands now, I don't care for the title at all. 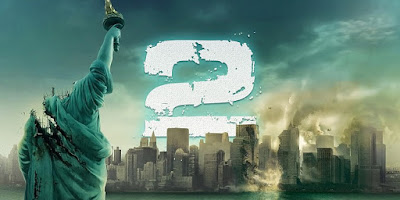 What do you think? Did you like the trailer for 10 Cloverfield Lane? Are you looking forward to the film? Leave your thoughts in the comments section below.