Free State of Jones is the true story of Newton Knight (Matthew McConaughey), a Mississippi farmer who leads a rebellion against the Confederate army. When I heard about this movie, it sounded fascinating. When we get war movies, not a lot of them are about the Civil War. It's usually World War II. But there is so much ripe cinematic material with the Civil War, about a nation divided, and it seems like Jones is tapping into that. Not everyone in the South was pro-slavery, and this true tale would explore the mindset of a man who doesn't agree with his country. Needless to say, I was excited to see a trailer, and now we have one.

I rather liked the trailer. It wasn't as exciting and thrilling as I thought it would be, but the footage looks great. They set up McConaughey well, and he has many good lines in the trailer. However, it does feel like they showed too much of the movie. It was okay that they showed the initial stages of the rebellion being formed, but as soon as they revealed the sneak attack at the funeral-- that was something I wanted to be surprised by when I watched the movie. It went too far in showing the story of the movie. I'm sure the entire film isn't spoiled, but I saw more than I wanted to see. But other than that, I really liked what I saw and I'm looking forward to seeing this movie. 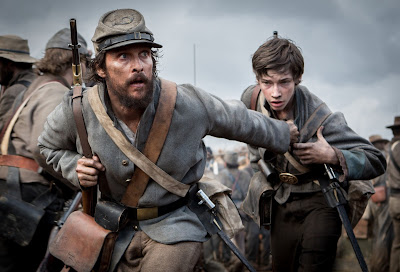 What do you think? Did you like the trailer for Free State of Jones? Are you looking forward to seeing this film? Leave your thoughts in the comments section below.