In Preparation For: The X-Files

With the new X-Files series being brought to television, I thought I would review the two movies that made it to theaters. I watched seasons 1-5 before seeing The X-Files and I finished the series before The X-Files: I Want to Believe. So while many other viewers will have a different perspective of these films, I am coming at it from the point of view of a fan of the series, and knowing the background and history of these characters. I acknowledge this, and will bring it up several times in my review, as I probably liked these films better than a person who had never seen a single episode of the TV show.

This will be a spoiler-filled review for The X-Files, so if you haven’t seen the movie yet, don’t read this article. 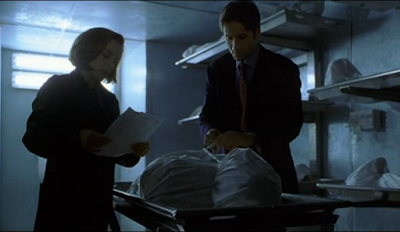 The X-Files takes place between seasons five and six of the TV series and it’s pretty obvious from the very beginning moments of this film.  The movie introduces us to a flashback to the cavemen, who discover extraterrestrial life in a cave. This entire sequence was highly reminiscent of the television show, which often shows a prelude scene of sorts before cutting to the main characters. And once we get to Fox Mulder (David Duchovny) and Dana Scully (Gillian Anderson), we see that not one bit of chemistry was left behind in the series. The two characters are perfect opposites: Scully is the analytical, scientific mind that won’t be convinced of anything unless she can see the hard fact. Mulder, on the other hand, is an open-minded romantic, who has spent his life chasing after proof of alien life in order to understand the abduction of his sister while he was a kid. And though I have lived with these characters for five seasons, and know them well, an audience member walking in fresh can quickly pick up on this. There are times when the characters will explicitly tell you, such as a scene between Mulder and Scully on the roof of a building in the first ten minutes of the movie. But for the remainder of the movie, a lot of the set-up and explaining of these characters is done through strategic subtlety. This allows for long time fans of the show to not be bored with excessive exposition, but allows a new viewer to get caught up, at least to an extent. And I shouldn’t be saying that there is no exposition, because there is, but it’s used skillfully only when actions can’t show what a monologue has to.

What made this film work so well for me was that it didn’t feel like a movie adaptation of The X-Files, but rather one long episode. It was very consistent in tone and style to the series, with the exception of it having a much larger budget. The core elements of the show that made it feel like X-Files weren’t lost in the transition to the big screen, and that is something I applaud the filmmakers and show-runners for. This could have easily felt like a generic sci fi film with the X-Files logo, but instead it feels like it is genuinely apart of this universe. And as a fan, that was great to see. 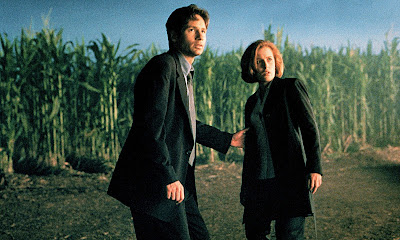 But a problem now comes for those who are not a fan of the show. I tried to watch this movie through two sets of eyes: a person who has watched all the seasons and knows everything and a person who doesn’t know jacksh*t about the show. What I noticed is that this movie definitely catered heavily to fans of the series. If you had watched all the seasons, then the bees, the virus, the blood—everything made sense. But for a person who knows nothing, you would be completely lost. The X-Files doesn’t stand on its own, but is rather simply a link between seasons. And like I said, it works fantastically for a fan of the series. But if this movie was to profit only off the fans of the show, then it would have failed miserably at the box office. So it had to be able to be understood by all audiences, and it just wasn’t able to do that.

The story itself is a classic X-Files plot. Mulder and Scully are tipped off on a new part of the alien conspiracy, and uncover a lot of interesting details that furthers Mulder’s belief in extra terrestrial life, but hardens Scully’s views on scientific proof. But even though the plot itself follows a similar pattern to the TV series, it doesn’t feel bloated or drawn out. This is a plot clearly made for a movie that fits in with the style of X-Files. It is a slow burn, and for people not used to the show’s style, it may be very boring. But the movie departs from feeling like X-Files in the end, when Mulder discovers the underground liar housing alien hybrids. I know that the movie had a budget the show could only dream of, and they wanted to show it off, but the effects and scale and scope of this scene took me out of the movie. X-Files has always felt smaller and more grounded, despite being about aliens. And most of the movie felt the same way. But once it decided to spend money on (really good, granted) special effects, it became generic sci fi movie rather than X-Files.

There is also one part that I must comment on. Before Scully collapses from the bee sting, there is this really tender moment between Scully and Mulder, where they go in to kiss right before she collapses. This got me angry; because it is something I have been proud of the show not doing. What makes these two characters work is that they are friends. They aren’t on and off again lovers, but friends. And the loyalty and love we see between these characters is so much stronger than if they were in a relationship. It shows a respect from the show-runners that just because they have a female lead doesn’t mean she has to be the male lead’s love interest. So for them to throw that away, even to hint at the possibility of them being in love made me angry.

But I must comment on the cinematography. The camera shots and angles in this movie, as in the TV show, are beautiful. The transitions between scenes flow nicely, and this film really is masterfully directed. The acting is all top-notch. So as a X-Files fan, I really enjoyed this movie. But for a person watching this movie having never seen a single episode of the show, I can absolutely see why you would be lost. 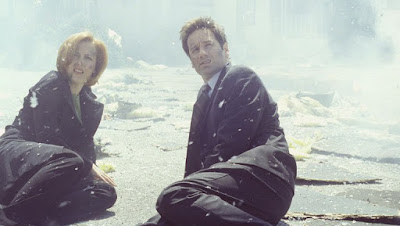 What do you think? Are you excited for the return of The X-Files to TV? What did you think of the movie? Leave your thoughts in the comments section below.