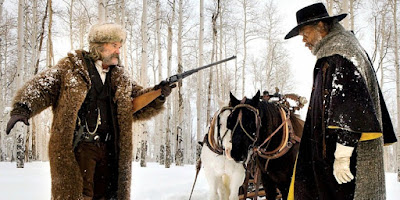 The Hateful Eight is the latest film from director Quentin Tarantino, and is one that I have been moderately interested in. I have to be honest here: I haven't seen any of Tarantino's films. I know that it's blasphemy, and I know that I really need to see his movies. I'm working on it. So The Hateful Eight is really my first true exposure to Tarantino. I was familiar with his style: wild, over-the-top, brutal violence and a lot of n-words. Now, after seeing this film, I am definitely wanting to check out more of Tarantino's films. Here, he crafts a well-written, who-dun-it type film that pits different character types from different backgrounds against each other in a very engaging social commentary.

The film focuses on John Ruth (Kurt Russell), a bounty hunter who is headed for Red Rock in order to collect a bounty on the mysterious Daisy Domergue (Jennifer Jason Leigh). After running into Major Marquis Warren (Samuel L. Jackson) and Sheriff(?) Chris Mannix (Walton Goggins), they are forced to take shelter in a cabin, where they encounter several other bounty hunters and people of different backgrounds, leading to a clash in culture, morals and egos. 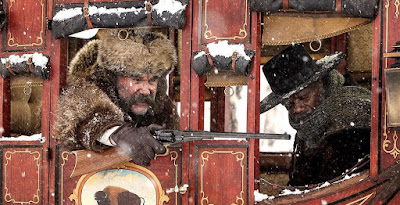 First and foremost, this is a very slow film. Sometimes that can be the death of a film, and sometimes it works in the context of the movie. The Hateful Eight leans more towards the latter, but not entirely. The movie takes its time to introduce its characters, and establish them. We meet our main characters, and then listen to them talk with each other for a while. This accomplishes in the task of us understanding these characters. We get to spend time with them, and thus we become connected to them. It's a good while before all the characters meet up and are together, and that's when the film picks up.

The second half of the film is definitely the better of the two. More happens, and sh*t really goes down. The action doesn't come into play until near the end of the film, but when it happens-- it's brutal. It's the kind of violence that many expect from Tarantino. But it almost feels a bit out of place, since the majority of the film before it is simply talking. It feels like a sugar rush, to be honest. The comedy works in this movie very well. It adds some levity to the film, but also keeps it engaging. It can get very boring very quick just listening to people talking, but Tarantino expertly sprinkles in the comedy to keep the audience hooked and engaged. Tarantino's offbeat humor worked for me, especially in one great scene with Samuel L. Jackson. I won't spoil it, but those who have seen the movie know what I am talking about. 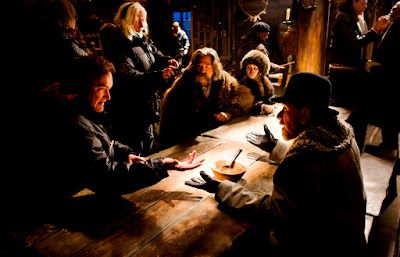 The performances in this film are really good. Jennifer Jason Leigh was great, and now she's up for an Academy Award. But I think the performances by Kurt Russell and Samuel L. Jackson are really being overlooked. They are fantastic in this film, and their charisma and energy shine as making this film so engaging to watch. Tim Roth, Michael Madsen, Bruce Dern and Demian Bichir are all great in supporting roles, but Leigh, Jackson and Russell stand out as true highlights. The cinematography by Robert Richardson is fantastic and really captures the western feel Tarantino was going for. The soundtrack by Ennio Morricone is also excellent. Both are equally worthy of their Oscar nominations.

I do have some problems with the film. Like I said before, the first half was better than the second, and that was mainly due to pacing. Even though its being slow works, it still could have been trimmed and shortened. There were some unnecessary shots or scenes that could have been cut in order to make a tighter and better film. But other than the pacing, I really don't have many complaints. The second half was just such an enjoyable film that I was able to forgive the slowness of the first half. 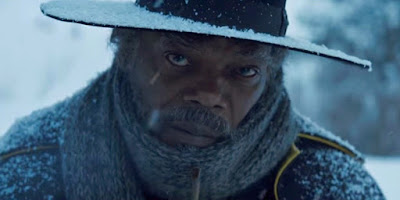 Overall, The Hateful Eight is a well-written social commentary that puts a locks a lot of big personalities in one room. Tarantino's outrageous style and offbeat humor works in telling this story. The film has great performances by Jennifer Jason Leigh, Samuel L. Jackson and Kurt Russell, as well as well-written characters. The movie takes its time in introducing the characters, so that we become more connected to them. However, the first half of the film drags a bit, and the pacing isn't as fast as the second half. But the cinematography and musical score are excellent, which help enhance this film. In the end, this is a really good film by Tarantino and I'm excited to see more of his work.

What do you think? Have you seen The Hateful Eight? Did you like the film? Leave your (spoiler-free) thoughts in the comments section below.