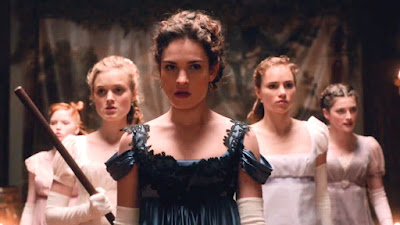 The film focuses on the Bennetts, a family of five girls looking to marry rich. At the same time, they have trained to be warriors, to fight off the zombie invasion that plagues the Victorian era England. Elizabeth Bennett (Lily James) has a complicated relationship with the mysterious Mr. Darcy (Sam Riley), at the same time that they try to combat hordes of zombies. 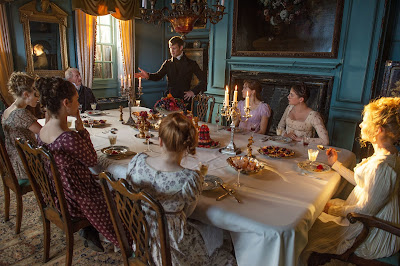 Like I said before, Pride and Prejudice and Zombies had a lot of potential. It could have been a really entertaining film. And it puts the pieces in the right place. Lily James is great as the lead. She does a very good job at carrying the film. While the sisters are more minuscule roles, they are fine on screen. Sam Riley is also very good as Mr. Darcy. The film sets up its mythology well: a zombie outbreak has ravaged England, forcing people to train to become fighters. Pride and Prejudice and Zombies' underlying feminist theme is strong, and it's a good message. It replaces the traditional lady-like image for badass warriors, making fun of the stereotypes of women and instead putting them in the more "manly" roles. This was something about the film I really appreciated.

The action choreography itself was also well done. There wasn't any shaky-cam used, and there weren't a lot of rapid cuts. A lot of the gore and blood was off screen, because this movie was PG-13. Regardless, I thought it got away with a lot of violence for a PG-13 rating. However, I thought this movie should have been rated R. That is my first complaint about the film. A movie of this nature should have had over-the-top, ridiculous action, and a R rating was needed for that. If this movie had become a light-hearted gorefest, then I think it would have been a lot more enjoyable. I know that the studio needed it to be rated PG-13 to maximize ticket sales, but an R rating would have made the end product so much better. 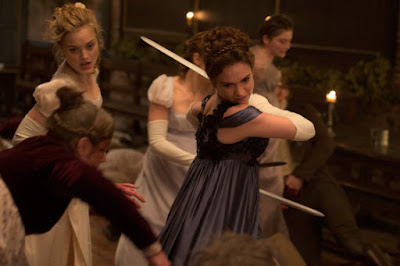 The biggest problem with Pride and Prejudice and Zombies is that is focuses too much on the Pride and Prejudice and not enough on the zombies. What should have been a 50/50 ratio was more like a 70/30. There also was no overall purpose for the zombies. They never truly amounted to anything. All that would happen was someone would be talking to another person, a zombie would appear and they'd kill it. There was no real story driving this movie. Like I said, the film focuses way too much on the relationships and the love story of the actual Pride and Prejudice novel. But the audience for this movie are not fans of the book, and that is something the filmmakers forgot. People who wanted to see this movie were looking for zombies, and they were just not abundant enough to satisfy.

The tone of this movie constantly changes from a slapstick comedy to a serious love story to a stylized action film, and the film really has a hard time deciding what is truly is. Contributing to this was Matt Smith who played a cousin of the Bennetts, and a potential suitor for Elizabeth. You can clearly see that the filmmakers wanted him to be comedic relief, but he did not fit in with the tone of the film whatsoever. And they kept coming back to his character for a lot of the second act, and everything he said and did fell flat. Smith acted like he was in a completely different movie, and nothing he did matched what this film had established itself to be. He then disappears for the third act entirely. The mismatches in tone are not truly apparent until he comes on screen. 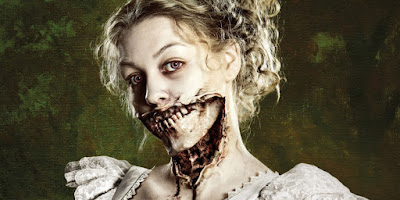 Overall, Pride and Prejudice and Zombies had a lot of potential to be a fun and enjoyable movie, and it missed the mark. The tone of the film was all over the place, and the filmmakers had a hard time deciding what they wanted the movie to be. The film focused too much on the Pride and Prejudice aspect, and made the zombies an afterthought, which does not bode well if the movie's intended audience. Matt Smith especially stands out as giving a ridiculous and over-the-top performance. The rest of the acting is very good, and the film establishes an interesting mythology. It just has a hard time following through with what it sets up.

What do you think? Have you seen Pride and Prejudice and Zombies? Did you like the film? Leave your (spoiler-free) thoughts in the comments section below.