I have to admit it: I have never seen the original Ben-Hur. I know! Blasphemy for a film fan, right? Well, I'll get around to it someday. So I didn't necessarily share the outrage that many fans of classic cinema had when a remake was announced. I was indifferent to it. The original was made in 1959. I don't think it's "too soon". But like I said, I was indifferent. The casting of Tobey Kebbell and Morgan Freeman interested me but I had honestly forgotten that the film was coming out this year until the trailer dropped online. I played it not really having many expectations, but I did have an open mind to the film.

I'm sorry, but this film looks like a generic, garbage CGI-fest. Maybe the original Ben-Hur came first with these themes, but the idea of a rivalry between two brothers leading to them fighting in battle isn't original. I got vibes of Gladiator throughout the whole trailer. I will admit that Kebbell looks really good, and I would watch it solely because of him. But Morgan Freeman's wig took me right out of the movie. There's just nothing really special about this film, from watching this trailer at least. It just looks generic. The fact that it was directed by Timur Bekmambetov is interesting, because he directed Wanted, which I absolutely love. Then again, he also did Abraham Lincoln: Vampire Hunter, so let's not jump out of our seats quite yet. Hopefully a second trailer comes out that establishes this as more than just a special effects showcase, or it gets really good reviews, or else I probably won't end up seeing it. I'm sorry, but this just does not look very good at all. 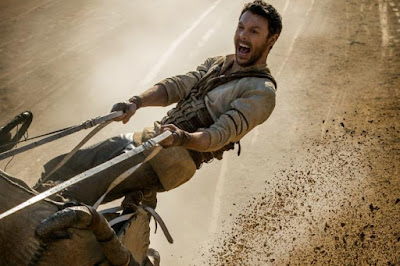 What do you think? Did you like the trailer for Ben-Hur? Are you looking forward to seeing the film? Leave your thoughts in the comments section below.

**This is our 700th article! Thanks to everyone for reading**