Top 5 Favorite Moments From: One Flew Over the Cuckoo's Nest

This is the eighth installment of this editorial series where I basically take a movie and pick my personal five favorite scenes from that movie. Then, you can go into the comments and say why you either agree or disagree with me. For this article, I will be doing One Flew Over the Cuckoo's Nest. Warning- there are spoilers!


(Make sure to check out our other "Top 5 Favorite Moments From" for The Dark Knight Rises, The Matrix, Rise of the Planet of the Apes, The Avengers, The Shawshank Redemption, The Wolverine and Swingers- all right here)

One Flew Over the Cuckoo's Nest 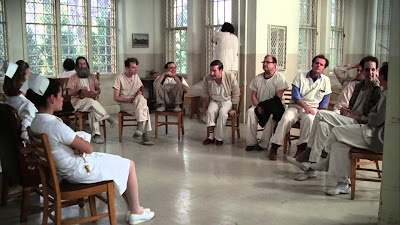 It's pretty obvious from the very beginning of this movie that everyone in the mental hospital is crazy. But it really isn't until the scenes where they sit around for "group therapy" that the craziness truly comes out. We get to see highlights from each of the characters, and learn what really makes them tick. With this particular group therapy session, Cheswick (Sydney Lassick) really wants his cigarettes, which Nurse Ratched (Louise Fletcher) refuses to give him. Cheswick begins to break down, screaming and yelling, and even McMurphy (Jack Nicholson) gets involved.

This scene was so great because you really got to see each character break down in their own way. It is also a masterfully directed scene, at the hands of Milos Forman, who crafts the scene perfectly. He builds up the anticipation, until the tiniest little thing like a cigarette breaks everyone down into a complete mess. And we get to see that McMurphy really cares about the other patients. He gets into a fight with the guard to protect Cheswick, so even though he takes their money and riffs on them, we know he deep down does care for these other people. 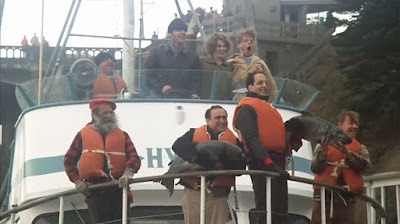 After McMurphy finds away for the patients to escape the hospital, they take a boat and go fishing. None of the others had ever been fishing, so we see McMurphy painstakingly explain the process and the point. After getting Cheswick set with the wheel and the other guys set with their rods, McMurphy proceeds to escape with his girlfriend Candy (Mews Small) to have some fun. Everyone else, who are morbidly curious, leave their posts (including at the wheel) to peak in and see what is going on. This causes the boat to sway and lose track, and everything goes into uproar.

In a movie about mental illness and incarceration, it's nice to have moments of levity and fun. This is definitely one of those moments. The sarcastic interactions between McMurphy and the other patients are great, but we also get to see a scene built up and fall apart as in the last scene. You feel for these characters, and this scene is pivotal in establishing the need to escape, as we see what the outside world is really like, and how many of these characters have not truly experienced it in their years of being locked away. 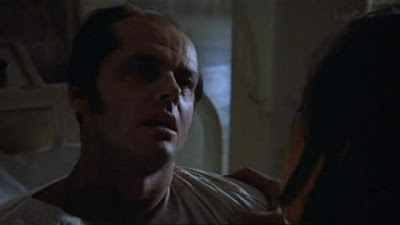 After McMurphy has been taken away for the Christmas party, the Chief (Will Sampson) waits patiently for him to return, so that they may escape. But when McMurphy returns, he has been made brain-dead by the doctor's experimentation to make him docile. Realizing that this body will never be the same McMurphy he once was, the Chief places a pillow over his head and puts him out of his misery. He then proceeds to put a hole in the wall and escape the institution, making this the climax of the film.

Like I said, this is the climax of the movie. Everything has amounted to McMurphy and the Chief's escape, but now that has been foiled. In a heart-breaking interaction between the two characters, we see a lot more of the Chief's range, as he has been a silent background character for much of the film. We also see the incredible talent of Jack Nicholson, who does not simply act dead, but adds random breathing and blinking to remind the audience that this is still a living person, making the Chief's decision not so clear-cut. It wraps up the film perfectly, and gives the audience the emotional send-off they deserve. 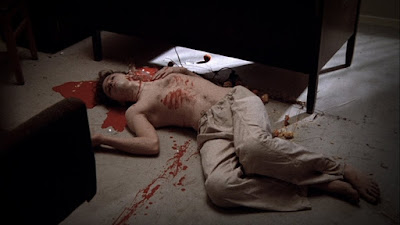 After sneaking girls and booze in and having a fun party, the patients wake up to find the nurses distraught and upset. Nurse Ratched pushes Billy Bibbit (Brad Dourif), after she discovers he slept with Candy, to a breaking point when she threatens to tell his mother about the incident. As a result, he freaks out and kills himself with a broken bottle of alcohol. The hospital goes into uproar, and McMurphy even attacks Nurse Ratched when she refuses to show any remorse for the patient who she just pressured into killing himself. This leads to even greater tensions between the staff of the hospital and their patients.

This scene is a great juxtaposition from the fun and light-hearted party scene to this grisly, violent and disturbing aftermath. It takes Billy's character to a maximum level, and shows just how sick he really is. We also see just how much McMurphy cared for him, as he is fueled with anger when Nurse Ratched shows no remorse. Before the ending with the Chief, this is really a climax of the friendship of the group of patients and after a fun little scene reminds the audience just how disturbing this film can be. It's a powerful scene and it is hard to watch, but you walk away  with this scene being one of the most memorable of the entire movie. 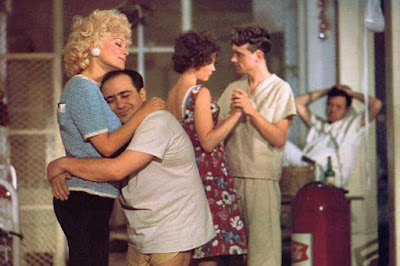 McMurphy enlists the help of a late night security guard in order to sneak in a lot of alcohol and some girls in for the other patients. The scene consists of one giant party, as the patients spend their time enjoying their lives and defying the rules of the institution.

What's so great about this scene is that we get to simply see the pure joy on these people's faces. Their entire lives consists of being cooped up in this facility because they are unable to partake in society. We heard it before when Cheswick said he had never seen a baseball game-- they are missing out on so many things that embody the human experience, because they are locked away. So this scene sees them finding joy in something they have never had the chance to experience before. With humor, the scene makes you feel happy for the characters, and it is just a really great scene to watch. It is truly the calm before the storm, as the film takes a dark turn after this scene. 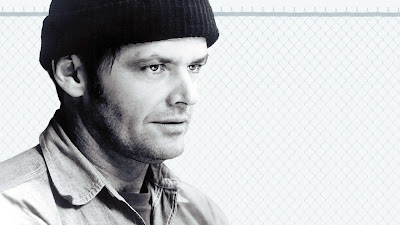 What do you think? Do you agree with my list? What are some of your favorite moments from One Flew Over the Cuckoo's Nest? Leave your thoughts in the comments section below.