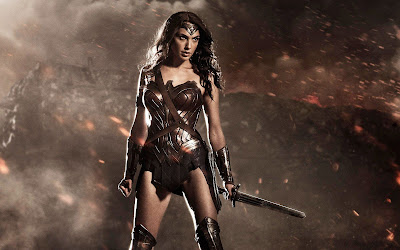 Despite the negative reviews coming out of Batman v. Superman: Dawn of Justice, one resounding positive is Gal Gadot's performance as Wonder Woman. Many are now drawing their interest to her stand-alone film, which is due out next year. And we know very little about it. It does take place during World War I, and we will be learning a lot about the Amazons, and their homeland of Themyscira. This will also be the start of several stand-alone superhero epics, which will come before and after next year's Justice League film, which will unite all of DC's heroes. After Suicide Squad in August, Wonder Woman is the next movie in line.

With all the focus on DC for Batman v. Superman, Entertainment Weekly has released a new image from Wonder Woman, revealing the landscape of Themyscira, the Amazonian armor as well as Gal Gadot, Connie Neilsen, Robin Wright and Lisa Loven Kongsli all in costume.

I really like the look of this. The armor bares a strong resemblance to the battle armor shown in Thor, but that's not a bad thing. It's different enough for it to work. I really like the look of Themyscira, and how it brings a bit of the tropical element to it (making their title of "Amazonian" work). The weapons look really good. However, I don't really like Gal Gadot's armor. I much prefer her ultimate Wonder Woman armor from Batman v. Superman. It doesn't look like true armor, but rather something she'd wear under her armor for additional protection. Maybe this is a temporary thing in the film, but I don't think it looks right. But other than that I really like the look of everything.

"It's total wish-fulfillment. I, as a woman, want Wonder Woman to be hot as hell, fight badass, and look great at the same time-- the same way men want Superman to have huge pecs and an impractically big body. That makes them feel like the hero they want to be. And my hero, in my head, has really long legs."

I think this makes a lot of sense. For the all-female society of Themyscira, completely isolated from the world of man, it wouldn't make any sense for their armor to be masculine. It has to be unique, and I think they really captured that. I can really sense the passion from Jenkins, and I am really excited to see her vision on screen. These images just make me more excited to see this film! 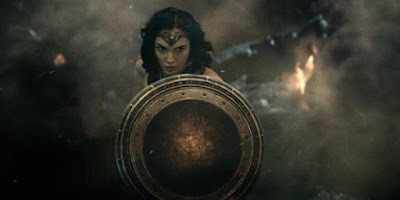 What do you think? Do you like the look of Wonder Woman? Are you looking forward to seeing this film? Leave your thoughts in the comments section below.