X-Men: Apocalypse seems to be one of the comic book movies that is slipping through the cracks. With so many coming out this year, it's easy to forget about a few of them. But there is a lot to be looking forward to with Apocalypse. It's the culmination of the entire X-Men franchise, as well as it introduces one of the most popular and powerful X-Men antagonists with the titular Apocalypse, played by Oscar Isaac. The first teaser trailer was really good! It gave us a taste of what to expect from this film, without spoiling too much. We got to see our villain, as well as James McAvoy's Professor X (finally) with a bald head. I really liked the teaser trailer, but with the film coming out in just a couple months, it was time for another one. And now we have it.

I really liked this trailer. It captured the same feel as the teaser, but it expanded upon it. We got to see a lot more of Apocalypse, and they've changed his voice. I'm glad they did, because he didn't sound very threatening in the other trailer. Now there's more authority in his voice. I loved the glimpse we got of his origin, and I think that will be a great opening scene. In a way, this was really an extension of the teaser. I would have liked it to be a bit structurally different, but I was fine with this trailer. It told me everything I wanted to know about the movie. But where the hell is Wolverine? If he is in the movie, I would have expected to show up at the very end, similar to Spider-Man in the last Captain America: Civil War trailer. But I am still very happy with this trailer. It gave me just enough to be content. I'm sure we'll get a third trailer before it comes out in May, but I would be completely fine if this was all that we got. 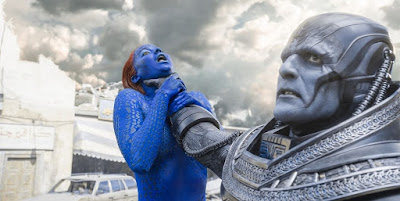