I was really upset last year when I heard that Snowden was being pushed back from a December 2015 release into 2016. I really liked the teaser trailer the film put out, and it sounded very interesting. The story of Edward Snowden has a lot of cinematic potential, and Joseph Gordon-Levitt is a fantastic actor. So when Snowden moved, it put me off. But now it's back, and Snowden is looking at a September release. I don't think the film moved due to the quality; I think a certain Star Wars Episode VII: The Force Awakens scared it away. So I don't have many doubts about this film. I think it could be something really cool, and I was looking forward to seeing a full length trailer to get a better sense about what director Oliver Stone is going for. And now we have it.

I really liked this trailer. It had a great, espionage type feel to it. It gave us a brief explanation behind the NSA spying, and then dived straight into Snowden's debatable treason. Even though this is a true story, I did feel that the trailer gave away a bit too much. There were certain scenes (the Rubik's Cube going through security) that could have been very intense without having seen their resolution in the trailer. But since it is a true story, I can give it a bit of a pass. What I didn't know beforehand was just how many big names were in this film. Aside from Gordon-Levitt, you have Shailene Woodley, Nicolas Cage, Zachary Quinto, Tom Wilkinson and Melissa Leo. That is a great cast with a lot of potential. So overall I liked the trailer. I think this could be a great film. Joseph Gordon-Levitt looks great as always, and this could really be a fun and interesting film about the controversial story of Edward Snowden. 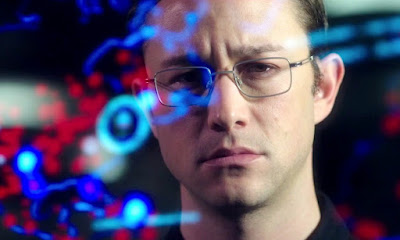 What do you think? Did you like the trailer for Snowden? Are you looking forward to seeing the film? Leave your thoughts in the comments section below.