It was just a few months ago that we got the teaser trailer for this year' The BFG, which you can see here. For the most part, I liked it. It didn't give much way, but it was just a taste of Steven Spielberg's next epic film. And I love the Roald Dahl story. It's a classic book that I used to read all the time as a kid, and it's perfectly ripe for a cinematic telling. And of course, the fact that Spielberg is directing makes it just that much better. So I've been interested in seeing a full length trailer, because this film has a lot of potential. And now we have our first, true trailer!

I really liked it! It captures the magic and the mystery of the book excellently. The dynamic between the Giant (Mark Rylance) and Sophie (Ruby Barnhill) is great, and I'm looking forward to seeing it further explored in the film. The design of the BFG is terrific, and it looks lifted straight from the cover of the book. The CGI in the film doesn't look great, but I'm sure they're just finishing up the shots before it's released in July. If the final film has this level of CGI, then that will be a problem, but I'm giving them the benefit of the doubt. Right now, everything is looking good for The BFG, and I'm excited to see if Spielberg can pull this off. 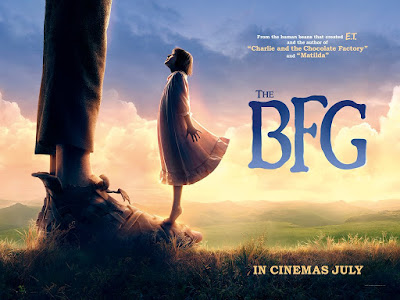 What do you think? Did you like the trailer for The BFG? Are you looking forward to seeing the film? Leave your thoughts in the comments section below.