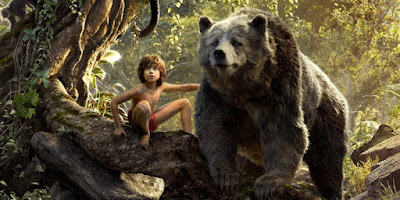 The Jungle Book is a film that I have really been looking forward to, but not always. The movie wasn't even on my radar, until the D23 Expo last year when footage from the film was shown. We, the public, didn't get our first look at the movie until its first trailer, but the sheer amount of buzz coming out of the footage screening was enough to catch my attention. At a convention where Marvel and Star Wars dropped major news and screened footage, The Jungle Book stole the weekend. So ever since then, The Jungle Book has been one of my most anticipated films of 2016. The fact that, according to director Jon Favreau, it is the most technologically advanced movie ever made, that it was all filmed in Los Angeles, the voice talent behind it-- there was so much to be excited for. But I didn't get a chance to see the movie until now, a couple weeks after its release. It was worth the weight. Though The Jungle Book suffers from some story errors, it excels as being one of the best looking films in recent years, and being a marvel of a movie.

After the villainous tiger Shere Khan (Idris Elba) sets his eyes on hunting Mowgli (Neel Sethi), a man-cub, he must escape the jungle with the help of new-found friend Baloo (Bill Murray) and his long-time guardian Bagheera (Ben Kingsley). 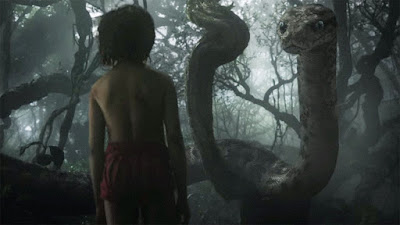 When you watch this movie, it's hard to keep in mind that this was all filmed on a studio backlot in Los Angeles. This film is so immersive, and so beautifully and meticulously animated, that you are immediately sucked in, and believe that this is a real jungle. The animals all look photo-realistic, and act as such. When you watch the behind-the-scenes clips, it's astounding to see how little Sethi had to work with. Pretty much just a blue screen and a tennis ball, and the final product is this gorgeous looking scene. This has to be one of the best looking movies I have ever seen. Even if this was on location I would still be in awe at how beautiful it was. But the fact that all of this was created in a computer makes it even more special. The CGI speaks volumes for this film, and really makes it. If you didn't believe every second of what you were watching, this movie would have failed. But due to hundreds upon hundreds of talented artists, this movie succeeded in being a visual marvel.

And I have to give a lot of props to Sethi. Acting against nothing but a green screen can be hard for any actor. Just listen to Ian McKellen recount his troubles filming The Hobbit: An Unexpected Journey, and he's a seasoned, veteran actor. Sethi is a 12 year old child actor, and he sold this film. You bought into him, and he was the anchor throughout the film. Sure, he did have a few lines said poorly and whatnot, but considering what he had to deal with filming this movie-- he is absolutely incredible. And all of the voice actors truly bring their characters to life. I was dumbfounded by how great each of the animals looked, but their excellently casted voices made them characters for me. Baloo became more than a bear, but was a true supporting character. All the voices are fantastic. But Idris Elba as Shere Khan and Christopher Walken as King Louie stand out as the best among this superb cast. 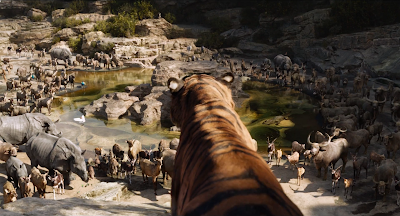 I do have some problems with the film, though. The story is a bit choppy. It got better for the second half of the film, but the first half the movie almost went scene to scene with no fluid transition. It would keep cutting to black and Mowgli would be somewhere else. This annoyed me, as it felt like just a collection of scenes without any tangible thread. Some of the animal animation wasn't perfect, either. Some of them didn't look 100% rendered. It looked like if they took an extra month they could have made it perfect. And some of the animal designs didn't fit, especially the mice. All the other animals were photo-realistic, and then a few of them looked really cartoonish in design. Also, some of the voices didn't feel natural. Because they were recorded separately, there wasn't any depth of sound coming from either the foreground or background depending upon where the character was, but rather it just played over the scene. These are minor complaints, but they were things that took me out of the film.

The ending is where I have the most problems. It's a great scene between Mowgli and Shere Khan, but the actions these characters take don't make a lot of sense. It's a lot of running around, doing something, not doing it, doing it again. I know it's vague, but this is a spoiler-free review. You'll be able to tell when you see the movie. This climax could have been constructed better is all I'm really saying. It's effective in capping off the film, but it was weaker compared to the rest of the film. And I did have a problem with the songs. Baloo's "Bare Necessities" was great, and they weaved it into the film naturally and organically. However, King Louie's "I Wan'na Be Like You" was very forced. It was a good song, and I enjoyed hearing it, but it just happened all of a sudden, like in a musical. It didn't fit with the tone of the film up until that point. They could have found a better way to put it in, because the song needed to be in the film. But they didn't do a good job of having it fit into the film organically. 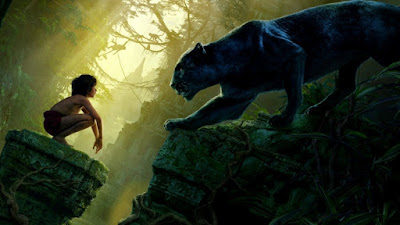 Overall, The Jungle Book is a beautiful and visceral experience. The CGI is done magnificently and takes the film over-the-top. It makes the movie. Neel Sethi is great as Mowgli, and is especially great when you think about the fact that he's a child actor working against nothing but blue screens. The voice performances are all great, and really bring the animals to life, making them true characters. However, the story is a bit choppy and is edited poorly for the first half of the film. The climatic scene, while engaging, is poorly constructed and could have been done better. The use of "I Wan'na Be Like You" also did not feel natural in the movie, and was very forced. But the accomplishment of the CGI and animation in this film far outweighs its minor flaws, and rounds this out to be a great movie that truly needs to be seen in theaters.

What do you think? Have you seen The Jungle Book? Did you like it? Leave your thoughts in the comments section below.