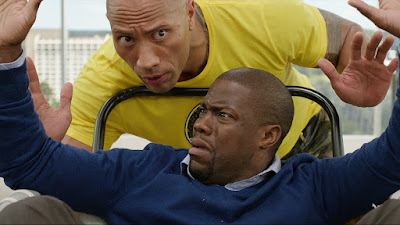 Central Intelligence is a movie I have been anticipating for some time. I love Dwayne Johnson. He has such great charisma and charm, and elevates any film he's in. Last year, he starred in San Andreas, which was really only watchable because of him. He is always a stand-out in films, and has become one of my favorite people in Hollywood. And I mostly like Kevin Hart. He kind of does the same shtick with every film, but when he's on, he's great. So seeing these two actors paired up together seemed like it could be a match made in Heaven. The plot seemed kind of ordinary and the jokes in the trailers weren't super funny, but I hoped that with the chemistry between these two actors, this movie may turn out to be something quite special. But in the end, Johnson and Hart work really well together, but unfortunately the movie just doesn't deliver on quality jokes, or an interesting plot.

Back in high school, Calvin Joyner (Hart) was the man. He was valedictorian, captain of the football team, president of the drama club, etc. His life peaked in high school, and now he's an accountant and hates his job. Joyner then meets Bob Stone (Johnson), formerly the bullied fat kid in high school now turned bulked-up CIA agent, and Joyner is thrown into a mission against his will in order to save the world, and solve the mystery of Stone's allegiance. 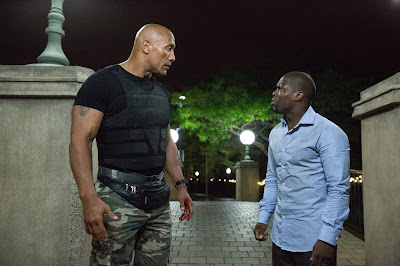 Let's talk the positives: Kevin Hart and Dwayne Johnson are really good together. I think they're a great match, and I would love to see them working together in other films. I don't think they were the problem with this film, necessarily. It was just the jokes they told. Hart did the same thing he does in all of his movies, talking really fast and really high pitched, freaking out at everything that happens. And it didn't annoy me as much as I thought it would. I actually kind of cared for his character. He was a man trapped in a bigger picture, in a Neo-esque kind of way. While I note that Hart was doing the same thing he does in every movie, it didn't bother me. And Johnson plays a completely different character than he's ever done. Sure, he's a badass but he's also very messed up in the head. And that was one thing the movie didn't take far enough. They introduced the idea of him being into unicorns and having a lot of childish elements, but they didn't really build on it.

The biggest let-down for me was the comedy. It just wasn't funny. There were a couple of jokes that I laughed at, but there was a lot of eye-rolling and "really?"s. It just fell back on stupid, sh*tty jokes that didn't add anything to the movie at all. I was very disappointed. When a comedy fails at its humor, it fails as a movie. It's plain and simple. This could have been really good, if the jokes were much, much better. I feel bad, because I really wanted to like this movie. It just wasn't funny and if you can't make an audience, who desperately wants to laugh, laugh, then that's very sad. It's also sad because Johnson and Hart are very capable comedic actors. I've seen them both turn it on before. But it just wasn't there for this one. 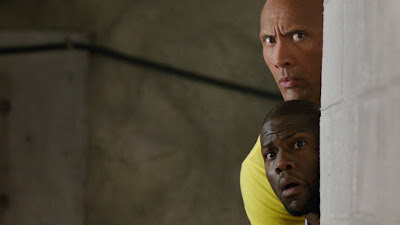 One thing the film had going for it was it had an on-going mystery that I was genuinely interested in. It kept asking who was good and who was bad, and I thought this was actually well done. I did end up guessing the ending half-way through the movie, but I was still invested in the mystery. But the other thing I need to talk about is the action. This is marketed as an action/comedy, and its 0 for 2 for both. The action was 80% shaky-cam and fast cuts. I had a hard time telling what was going on. This film could have excelled at the action. For a movie like American Ultra, the comedy failed but the action was incredible, and it was the only redeemable part of the film. With Central Intelligence, both the comedy and the action failed.

Overall, Central Intelligence is a major disappointment. Dwayne Johnson and Kevin Hart are great comedic actors, and I would like to see them together again, but this film just didn't have good jokes for them to tell. The jokes were stale, and cringe-worthy at some points. The action also wasn't very good. It was just shaky-cam and rapid editing. The mystery the film set up I was invested in, and I actually cared about Hart's character, but it did little to save this film. I really wanted this movie to be good, and unfortunately, it just wasn't. 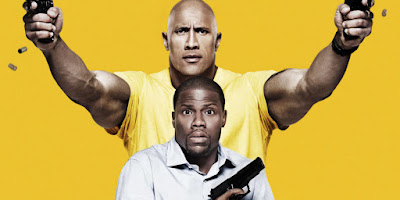 What do you think? Have you seen Central Intelligence? Did you like it? Leave your (spoiler-free) thoughts in the comments section below.