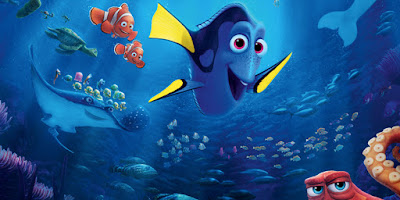 I hold Finding Nemo to be one of my favorite Pixar films to date. It was fun, exciting, scary, adventurous, and had a great message about family, and about overcoming challenges and disabilities. So I was hesitant when I heard the news of a sequel coming out thirteen years after the original. Either the sequel would just be a rehash of the original, or it wouldn't be nearly as good as the first. And the trailers hadn't sold me either. The visuals were fantastic and I felt like I was right back in that world, but the comedy and substance of the trailers hadn't clicked. But after the 95% critics rating on Rotten Tomatoes, I walked into Finding Dory very excited. I checked my enthusiasm, knowing it would not be as good as Finding Nemo, but I went in expecting a good movie. And that's what I got. Finding Dory is a really good film, even though it doesn't come close to being as good as the original.

Six months after the events of Finding Nemo, Dory begins to have memories of her long-lost family, and embarks on a quest to find her parents. 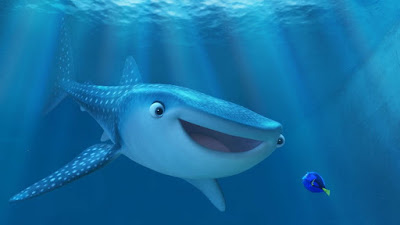 I really liked this movie. Is it as good as Finding Nemo? No, not at all. But it still stands on its own as an enjoyable film. Ellen DeGenerous brings back the energy and comedic genius of Dory. I wasn't sure if Dory, who had mainly been comedic relief and a contrast to Albert Brook's uber-serious Marlin in the first film, could carry her own film. But in hindsight, she definitely can. With Finding Dory, her disability (short-term memory loss, if you forgot) isn't simply a gag to fall back on, but it is explored as being part of who she is. Sure, we get several good laughs at it, but the film explores the dark parts of it, and how hard it can be to live with a mental disability. That's one thing this film captures excellently! It has a fantastic message about not letting mental disabilities define your limitations, but instead letting them be a part of who you are, and letting you be you in your own unique way.

The supporting cast also excels. Brooks returns as Marlin, who doesn't get as much screen time as in the first film, and isn't as fleshed out. But we didn't need him to be, as he had his own movie with the original. He has a lot more subtle moments, that are more impacting if you remember the first one. Nemo also returns, but this time voiced by Hayden Rolence. They did an excellent job finding an actor to replace him, as I couldn't tell a difference between the two voice actors from the first film and this one. We also get to see a whale shark named Destiny (Kaitlin Olson) and a sea lion named Fluke (Idris Elba), but the stand-out of the new characters has to be the "septapus" Hank, voiced by Ed O'Neill. He has a similar ultra-serious contrast to Dory as Marlin does, but it's a different dynamic. And it works really well throughout the film. 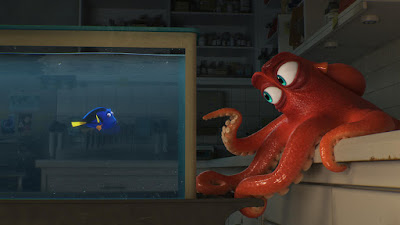 The negatives for me go back to one thing: this film just isn't as good as the original. Don't get me wrong; I really enjoyed this film. But where I enjoyed this one, I loved the first one. It didn't have that spark, that flare that the original had. And it's hard for me to pinpoint where it lost it. Maybe the stakes weren't high enough. In the first one, Marlin is on a quest to find his son. We know his son has been taken and he has to find him. With this one, Dory has a faint memory of her parents and sets out on a quest to find them, but you don't know if they are even around. The stakes were more tangible, and connectable with the first. Also, the other one had a larger element of danger, as you are delving deeper and deeper into the vastness of the sea, whereas with this one you are moving into more and more confined areas in an aquarium. The outward versus inward dynamic may be a portion of why this film was lacking.

With a sequel, the common ideology is to go bigger and better. Finding Dory attempts that, but sometimes it gets a little too big for its own good. It got to the point where, specifically in the third act, too many outrageous and ridiculous things were happening that it lost its foot in reality. In Finding Nemo, the characters had personalities, but they weren't necessarily human. With Dory, the fish become a lot more human, and it hinders the magic. And while this film has emotional parts, it doesn't have the staying power as the first, or the rewatchablility. Finding Dory also falls back on the original a few too many times. It introduced certain characters and called upon key scenes, which is fine, but it did this to the point where it was detracting from the film as its own, stand-alone story, and felt a little too much like fan-service. 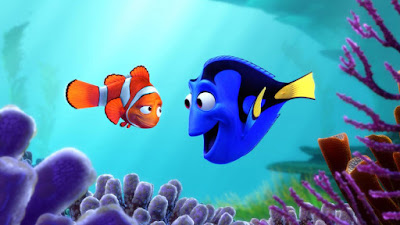 Overall, Finding Dory is an enjoyable and solid sequel. It's no Toy Story 2 or 3 in terms of being able to match and top its predecessor, but it allows us to see and interact with characters like Dory and Marlin and Nemo once again. This film definitely expands on Dory as a character, and makes her more than just the comedy relief she was in the first. The film needed more of her dynamic with Marlin, as that was an element that was lacking. While the supporting cast is good, Ed O'Neill stands out as the octopus Hank, a newly introduced dynamic in the film that really works. However, this film does get to be too big and too ridiculous at times, especially in the third act. It also, while is good, doesn't have the same level of emotional grip as the first. So while Finding Dory does manage to entertain, it doesn't come close to matching the quality of Finding Nemo.

What do you think? Have you seen Finding Dory? Did you like it? Leave your (spoiler-free) thoughts in the comments section below.