While we have some big, giant blockbuster films coming out this summer, it's also nice to get some smaller films sprinkled throughout as well. Enter Marauders, a film I hadn't even heard of until just a couple days ago. It looks like an action-packed thriller, something that could be just what we need in early July, when it comes out. With blockbusters, you don't get a lot of dark, gritty, bloody action films, and that's a hole that it seems Marauders is trying to fill.

This trailer looks really cool. For whatever reason, I'm almost always turned on to a film when it features guys in cool masks breaking into banks. The cast for this movie is excellent, starring Christopher Meloni, Bruce Willis and Dave Bautista. It's good to see Bautista in more roles than just the strongman, because he is very dedicated to becoming an actor, and I would like to see him in more. This film really reminds me very much of a film that came out earlier this year, Triple 9, which I never ended up getting to see. But I think I'll end up checking this one out. It seems like it could be a really cool, simple movie to check out in-between the summer blockbusters. It might not be more than just a popcorn flick, but it looks like it could have some cool moments regardless. 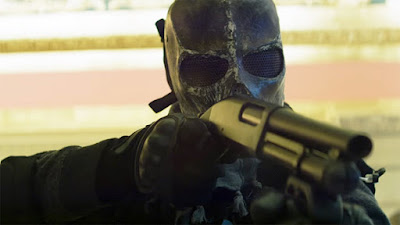 What do you think? Did you like the trailer for Marauders? Are you looking forward to seeing the film? Leave your thoughts in the comments section below.