In Preparation For: The Conjuring 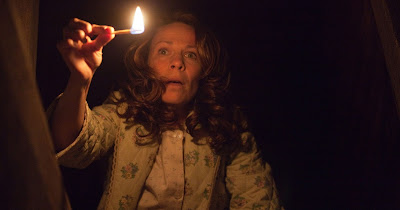 With The Conjuring 2 opening in theaters this weekend, I thought it would be good to go back and see the first film, before I checked out the sequel. Keep in mind, I am not a fan of horror movies. I feel they are cliched, and rely on the same stupid tricks and gags. I tend to prefer psychological thriller instead. It seems like modern horror films consist of fake jump scares, poor acting and horrendous dialogue that just make them poor movies, and that's why I don't care for them. So when a horror movie comes around that is actually good, it makes all the more special. I knew going into The Conjuring that it was a more renowned horror film, so I was expecting a good film. And I was very impressed with what I saw.

This review for The Conjuring will have spoilers, since the film has been out for a few years already. So if you have not seen the movie, go see it then read this review. 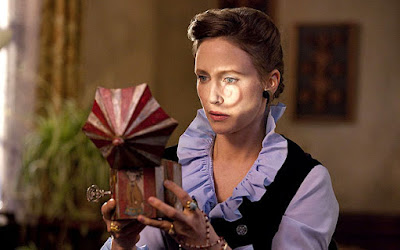 The Conjuring is based on real life paranormal investigators Ed (Patrick Wilson) and Lorraine Warren (Vera Farmiga) who look into the case of the Perrons, who have recently moved into a new home that is seemingly haunted. The Warrens go through their procedures in order to figure out the source of the haunting, and find that the house belonged to a woman who was tried as a witch, and even killed her own child before committing suicide. The Warrens try to remove the dark spirits haunting the house, but things go to the next level when the mother, Carolyn (Lili Taylor), becomes possessed by the witch and Ed must perform a spontaneous exorcism, not ordained by the Catholic church. It is difficult to swallow, but the filmmakers insist this is all based on truth.

I really liked this film. The weakest point of horror films for me is the bad acting, but this film has phenomenal performances. Wilson and Farmiga are great in their roles, and Taylor is fantastic in the film, especially in the third act when she becomes possessed. Every actor was believable in their roles, and it never felt cliched or cheesy. The quality of the performances sucked me into the film, and really made this movie for me. James Wan did a fantastic job directing, as he allowed for true tension and suspense to build in the film. It elevated and elevated, and it never climaxed with a false jump scare or something fake, but rather something legitimately terrifying that made it all worthwhile. There were many points where I was on the edge of my seat watching this film, not sure where it was going to go next. 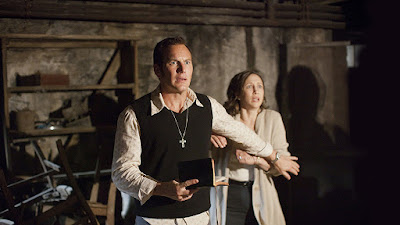 I thought, however it could have been a bit shorter. The initial beginning where the film split between time with the Warrens and the creepy stuff happening to the Perrons before the two crossed paths went on for too long, and it could have been cut down. There were three nights of things happening before the Perrons found the Warrens, and we really only needed two. I was watching thinking "Okay, come on. Let's move this along." And some of the scares were a bit underwhelming. For a while, the only supernatural things happening were doors opening and closing, and pictures falling. I kind of needed more substance in the beginning. But this was all forgiven by the third act, which was phenomenal. Everything came to a perfect climax, with a suspenseful exorcism, which was absolutely terrifying. That was my favorite part of the film, and it really worked due to Wan's excellent directing, and the great acting that made it believable.

Overall, this is a really good horror movie. It doesn't fall into the typical cliches that plague modern horror films, but instead delivers on something that is actually really good quality. Everyone gives good, believable performances, and Wan adds fantastic directorial style. The cinematography is great, and these elements all come together to create suspenseful and tension-filled scenes. The plot and story of the film was really strong, and it sucked me right in. The film could have been shorter, and the beginning began to drag a bit, but the final act and the exorcism made up for all of that, as it was incredible to watch. I am now really excited to the The Conjuring 2, and I just hope it can live up to this film. 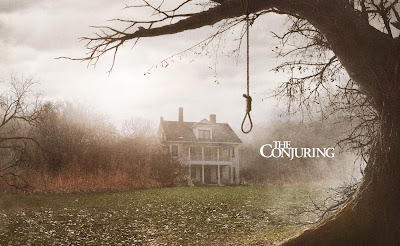 What do you think? Did you like The Conjuring? Are you interested in seeing The Conjuring 2? Leave your thoughts in the comments section below.