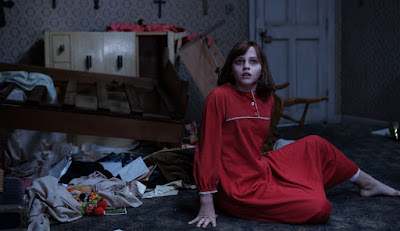 I had heard non-stop praise for The Conjuring for years ever after its release. So when I saw that the sequel was on its way, I promised myself that I would see the first one before the second, because these films genuinely looked good. You can read my review for the first film here. I've stated this before, but I think it bears repeating. I am not a fan of horror films. Most modern horror films are cliched, with fake jump scares, and have horrible acting and writing. I just don't care for them. But what made The Conjuring so good was that it had great performances, great writing and it created such a terrifying atmosphere. It succeeded immensely as a horror film, so I had high anticipations for the sequel. While The Conjuring 2 is not as good as its predecessor, it is still a great film and does little to disappoint.

Directly after the famous Amityville investigation, Ed (Patrick Wilson) and Lorraine Warren (Vera Farmiga) travel to England to help the Hodgsons, a family plagued by spirits. While the media has sensationalized the events, authority figures believe this to be a hoax. The Warrens must determine whether the Hodgsons are faking this in order to gain attention, or if there really is a darker presence lurking in the house. 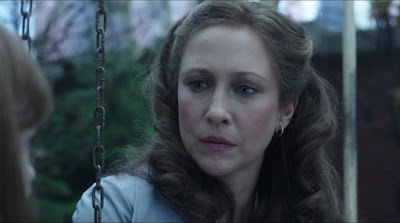 For me, The Conjuring 2 has the same strengths and weaknesses as the first film. The performances are yet again fantastic. Wilson and Farmiga further develop the Warrens, and put their marriage through some tough times. The writers, Carey and Chad Hayes, have described this film as a love story, and you can definitely see it, brought to life by Wilson and Farmiga's great performances. The family gives great performances in this as well, but Madison Wolfe absolutely shines as Janet Hodgson, the chief victim of most of the paranormal activity in the household. She is put through a lot of challenges as an actor, and pulls them off tremendously. I have said before that I don't care for child actors, but Wolfe blew me away. She was the equivalent of the possessed mother in the first film, acting-wise. I was very impressed with her performance, and she really made this film work.

The atmosphere works in this film again to be the chief antagonist. Director James Wan returns from the first film, and recaptures the magic for me. One of my problems with the first film was that for most of the beginning, the paranormal activity consisted of just doors closing and pictures falling, but Wan fixes that issue. While the activity crescendos in this film as well, a lot more happens, which keeps me engaged and on the edge of my seat. In many ways, this is a bigger film than the first one. It some parts it works, and others it doesn't. With the first film, the sole focus was the investigation, while this one also had the personal journey of the Warrens. And that element really added a lot more heart and personality to the film. 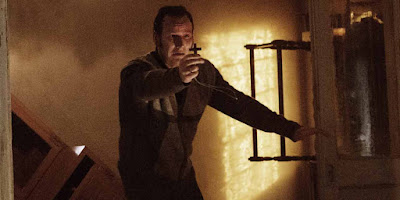 While most of the positives for the sequel are the same as the first film, most of my negatives are as well. It took a little bit too much time for the Hodgsons to meet the Warrens, about an hour into the film. The movie is also a little too long, and could have been shortened. I talked about how this movie is bigger than its predecessor, but there were some parts where it didn't work. The Conjuring succeeded as being a simpler story, whereas The Conjuring 2 has a lot more going on, and it got convoluted at points. Instead of one spirit, this film had several, and it made things kind of confusing. I think the sequel would have been better if it refrained from trying to be bigger, and kept with the simpler kind of story that the first one had.

Overall, The Conjuring 2 has some great, terrifying moments, and is a very effective horror movie. Everyone gives great performances all around, especially from Madison Wolfe as Janet. Patrick Wilson and Vera Farmiga further develop their characters and their relationship, adding a lot of personality to the movie. James Wan brings back the same kind of magic he brought to the first one, which elevates the film. However, this movie is a bit too long, and becomes over-complicated when it could have been simpler. And let me just say, the nun in this film freaked the sh*t out of me! In the end, The Conjuring 2 may not be as good as its predecessor, but it is still one hell of a film, and is a very worthy entry into the franchise. 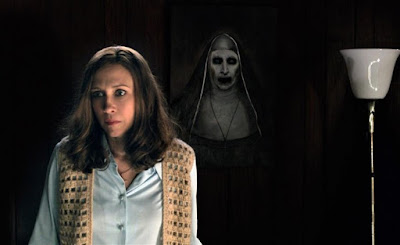 What do you think? Have you seen The Conjuring 2? Did you like it? Leave your (spoiler-free) thoughts in the comments section below.