Anyone who has read my site for a while knows my view on M. Night Shyamalan. He struck gold with The Sixth Sense, and it's one of my favorite movies. It was brilliantly done. Unbreakable was decent, and I've pretty much hated every movie he's done since. His last film, The Visit, wasn't God-awful, but it definitely wasn't a step in the right direction. So the trailer for Split, his next movie, came as sort of a surprise. It stars James McAvoy as a man with 23 different personalities who kidnaps a couple girls and holds them captive. McAvoy is a fantastic actor, and he always adds something every time he's on screen. And this kind of premise is something he can really sink his teeth into. So as a synopsis, this film sounds fascinating. Then I saw that Shyamalan was writing and directing it, and I immediately became apprehensive. But, as I watched the trailer, I put that judgment aside and watched it for what it was.

Strangely enough, the first time I saw the trailer, none of the dialogue played. It was just the visuals and the music. After I finished it, I looked up the trailer somewhere else to make sure that there wasn't a technical issue. And sure enough, I found the one with dialogue and watched it. I actually liked the one I saw without the dialogue more, because it put more emphasis on the visuals, which were beautiful. It's very well shot, and the musical score is great. I love the technical aspect behind this trailer. But the dialogue is just awful. It stands out in the worst of ways, and it really let me down. Like I said, the technical part of the trailer is great. McAvoy's performance has a lot of promise. But the dialogue brought this trailer down. I'm rooting for Shyamalan. I want him to succeed. So I hope this one turns out to be a hit. But, this film is scheduled to be released in January, so that doesn't bode well for it. Oh well, I guess we'll have to wait and see. 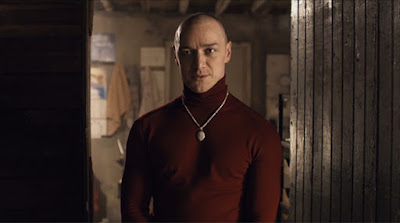