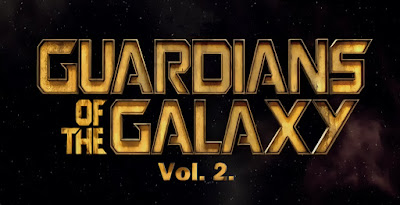 One of Marvel's most surprising films to date has been Guardians of the Galaxy, which proved that a talking raccoon and a walking tree can be a big blockbuster hit. So, many were incredibly excited to see director James Gunn return for the sequel, set for a summer release next year. So far, we haven't gotten really anything from the film, aside from casting announcements. But with San Diego Comic Con next week, a first trailer is highly likely, along with more information detailing the film. But until then, we'll just have to make due with some basic teaser images.

In the latest issue of Entertainment Weekly, our first piece of concept art for Vol. 2 is revealed, giving us a look at the new team roster. You can see the image for yourself below: 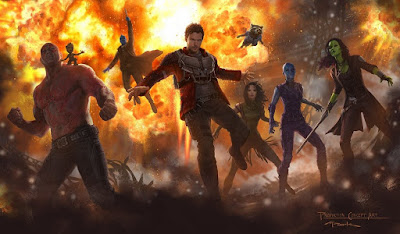 The design is very familiar, but a bit different. Star-Lord (Chris Pratt) is rocking a new jetpack, along with Rocket Raccoon (Bradley Cooper) wearing, well, a rocket. Gamora (Zoe Saldana) has a different outfit, and we get to see Baby Groot (Vin Diesel). I hope he's not a baby the entire film, because I really want to see the true Groot we got in the first film. Drax (Dave Bautista), Nebula (Karen Gillian) and Yondu (Michael Rooker) all look the same, but what stands out is our first look at newcomer Mantis (Pom Klementieff). Now, what's unclear is whether this is the new team of Guardians, or if these are just the main characters of the film. Because the film would need to explain a lot if Yondu and Nebula have joined the team, since the last movie left them on not very good terms with the Guardians. But regardless, I really like this piece of concept art, and it's great to see the new designs of the characters we love, as well as our first look at Mantis.

What do you think? Do you like the concept art for Guardians of the Galaxy Vol. 2? Are you looking forward to seeing the film? Leave your thoughts in the comments section below.